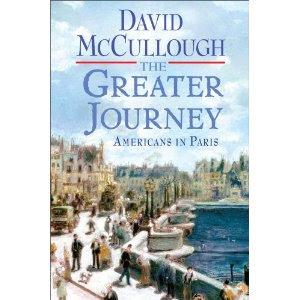 THE GREATER JOURNEY: AMERICANS IN PARIS BY DAVID MCCULLOUGH *** out of ****
$37.50 hardcover; SIMON & SCHUSTER

In 1831, Samuel Morse returned to Paris to begin what he believed would be the crowning achievement of his life. Not the telegraph -- that would come later. Morse went straight to the Louvre to begin a painting. One decade earlier he had produced House Of Representatives, a grand scale work that depicted the seat of American democracy and featured some 80 people of note within it. It was very typical of a certain type of "ambitious" art that would eventually fall out of favor.

This new work was in the same vein but even bolder. At the very least, it was bigger, measuring 6 feet by 9 feet -- if size meant anything at all to an American, why wouldn't it? The subject was the Louvre itself: Morse would capture a great hall of the famed museum and include 38 of his favorites works, including Da Vinci's Mona Lisa. Morse's great friend, the writer James Fennimore Cooper, could barely keep himself away and returned day after day to chart the painter's progress.

This style of painting -- one piece containing many smaller but bravura works or portraits within it -- is exactly the model for author and historian David McCullough's new book The Greater Journey: Americans In Paris. McCullough looks at the many artists, scientists, people of medicine and thinkers who made the voyage back across the Atlantic to find inspiration and knowledge in the City of Lights from roughly 1830 to the end of the century.


The Paris of the 1920s -- when Hemingway and F. Scott Fitzgerald romanticized the life of the expat -- seems almost a backwater when compared to the flood of people that came there during these six decades.

The stories keep coming, almost to their detriment. After a while, the tale of an American coming to Paris, falling in love with the city, finding themselves artistically or philosophically and moving on to great success does begin to blur a bit. In fact, The Great Journey does not have the compelling through-line of most of McCullough's major works, like The Path Between The Seas (about the building of the Panama Canal) or his biographies (Truman, John Adams).

But the spine that keeps you moving forward is McCullough's pocket history of Paris during one of its most remarkable and bloody eras. He sketches the Franco-Prussian war (in which McCullough shines with his depiction of American Ambassador Elihu Washburne and the man's steady and sober presence that saved many lives) to the horrors of the Commune.

McCullough might have focused just on "The Medicals," as he calls the many Americans who traveled to Paris for a proper education in medicine, returning the favor with their assistance during some of the bloodletting that century would feature. Their tales are some of the freshest and most unusual to be found here. But the book is bursting with such fascinating side-paths, and it would be churlish to call it over-stuffed with diversions. And yet, the stories do begin to lose their impact with so many of them being so similar in their broad outlines.

Like Morse's The Gallery Of The Louvre, McCullough fills his new book with deft mini-portraits of numerous figures and gives them the dramatic history of Paris during the 1800s as a canvas. The Greater Journey may not reach the greatness of his best, more focused works. But it will satisfy his fans and send the curious off into a dozen directions to learn more about these people. And, if they're lucky, on a pilgrimage to Paris.


*****
Thanks for reading. Michael Giltz is the cohost of Showbiz Sandbox, a weekly pop culture podcast that reveals the industry take on entertainment news of the day and features top journalists and opinion makers as guests. It's available free on iTunes. Visit Michael Giltz at his website and his daily blog.  Download his podcast of celebrity interviews and his radio show, also called Popsurfing and also available for free on iTunes. Link to him on Netflix and gain access to thousands of ratings and reviews.

Posted by Michael Giltz at 1:30 PM No comments: 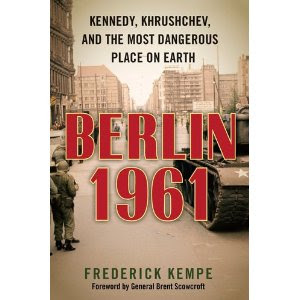 In 1961, the United States and the Soviet Union -- allies together during World War II -- faced off militarily for the first time over the fate of Berlin. The young John F. Kennedy (reeling from the Bay of Pigs) and the peasant turned politician Nikita Kruschev (who kept one eye on opponents in the Politburo and another on China) knew that Berlin was crucial.

If the US couldn't hold fast here, the countries that depended on it for protection from the ever-growing communist empire would lose faith. If the Soviet Union couldn't stop the bleeding (all of the best and brightest in East Germany were fleeing to the more vibrant West Germany literally by the thousands each and every day) then the ability to keep the Eastern bloc stable and secure was threatened. Even the USSR itself might not last if countries like Poland and Germany and Hungary began to peel off one by one.

Literally everything was at stake in Berlin, including the prospect of nuclear war. The US didn't have nearly enough troops to match the boots on the ground that the Russians deployed in East Germany. And now that the Soviets could boast of their own nuclear capability, Kruschev was certain Kennedy would never risk a nuclear winter just to keep Berlin free and open. Kennedy was just as certain he had to convince Kruschev the US would use nuclear weapons or the only way to keep the Soviets at bay would be to literally launch Armageddon.

This tense turning point of the Cold War is captured effectively with Frederick Kempe's page-turning book, a solid work of popular history that should be one of the breakout titles of the year. First and foremost, Kempe dives into his rich narrative that plots the back and forth between the superpowers month to month and day to day. Quick, vivid sketches of the state of the mind of the two world leaders are interspersed with dramatic details of the men and women caught up in history.

Kempe shows us the nervous young student who takes a risk and smuggles a passport into East Germany so a friend can escape; the old woman who dangles from a window towards freedom because her front door opens onto East Germany but her back window looks out to the West; and the tragic people caught on the wrong side when the Berlin Wall is thrown up overnight, the ones who realize they planned to leave one day too late.

We also get the secret backdoor channel that went from a mid-level Soviet spy to Bobby Kennedy and the loose cannon of a US general who knows the commies won't back down until you punch them in the nose and he's just the guy to do it.

Kempe's analysis draws on reams of material and solidly places the decisions of Kennedy and Kruschev in convincing context. Kennedy struggled to prove to Kruschev that he was hard-nosed. But no matter how often Kennedy said Berlin was of vital importance, Kruschev refused to believe it could be that important to them. That meant they edged closer and closer to the brink. Still, from the context of today, Kennedy's take on events seem reasonable and balanced from the start.

He was famously overshadowed by Kruschev at a summit meeting that led into the Berlin crisis. Aides were aghast to hear all the concessions Kennedy blithely offered up. But in fact, everything Kennedy said and the stance he took became the de facto US position throughout the Cold War. Kennedy repeatedly made clear the US wouldn't interfere with whatever the Soviet Union did in East Germany. He acknowledged the facts on the ground of Eastern Europe and accepted it as a fait accompli. Kennedy knew the people of the US weren't remotely ready to go to war over unifying Germany, the country they had just defeated after it launched a world war. And Kennedy was right.

Kempe details the almost miraculous feat of East Germany throwing up a barrier overnight throughout the entire city of Berlin, a barrier that would soon become the Berlin Wall. It's a remarkable moment bursting with tragedy and small moments of grace. As callous as it may seem, Kennedy was relieved by its appearance. He knew the Soviets had to stop the flow of refugees that were soon going to cripple East Germany for good and threatened its entire bloc. If the USSR hadn't allowed the wall, war might very well have come about.

This doomed East Germany and indeed the Eastern bloc to decades of Soviet control. But it also stabilized a dangerous military showdown. Kennedy also knew it symbolized defeat for the totalitarian regime of communism. Any country that must wall in its own citizens and threaten to shoot them if they try to leave is doomed to fail. Thirty years might seem a long time to wait for that to happen, but in historic terms it's a blink of the eye. Kennedy was right.

Kempe captures this dramatic moment with skill and verve, showing how the Berlin crisis arose out of the turmoil of recent months and why it led to the white knuckle events of the Cuban missile crisis soon thereafter. Entertaining and insightful, Berlin 1961 offers all the pleasures of John Le Carre with the added frisson that the dangers were all too real and the stakes never higher.

Posted by Michael Giltz at 2:00 AM No comments: