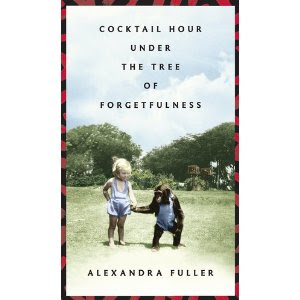 You may have lost track of author Alexandra Fuller. Her debut memoir -- Don't Lets Go To The Dogs Tonight -- was a rollicking, bestseller about Fuller's childhood in war-torn Africa with parents so much larger-than-life that they made the phrase "larger-than-life" seem rather puny. It was compulsively readable and funny and sharp. The book was very much an expected hit in my mind, despite the long odds of gaining a wide audience.

A sequel involving mercenaries slipped by quietly and Fuller also delivered a well-reviewed look at a Wyoming man who worked on oil rigs and fell prey to the indifferent safety records of the companies that run them.

But now Fuller has returned to the source in Cocktail Hour Under The Tree Of Forgetfulness. The source is not just her childhood but her parents and specifically her mother: Nicola Fuller of Central Africa. Mum always wanted to be the heroine of a story but Fuller's memoir was a bit too spot-on and became ever after that Awful Book. Well, now Nicola has an Awful Book of her own, in essence a biography that captures her eccentric, quixotic and downright dangerous tale with full room for humor, love and more than a few highballs.

It begins with Nicola cajoling her Dashing Little Sri Lankan into some pilot lessons so she can fly and land a plane (planes being a constant in the sort of rollicking life Nicola imagines for herself a la Out Of Africa, West With The Night and so on). Soon we flashblack to Nicola's childhood in Scotland, where the family war cry was -- when translated from Gaelic to English -- "Gainsay who dare." This captures Fuller's puckish but loving tone perfectly:


It took me a while to recover from the discovery that my Mum's family had a war cry, but then I thought about Mum and I realized that if you didn't have a war cry to go with that attitude, you'd have to invent one. During the bush war in Rhodesia Mum forwent her family's Gaelic war cry and took up a personal war cry. It was borrowed from [pop star[ Cliff Richard] and the Shadows and was about being a bandit from Brazil, being the quickest on the trigger and shooting to kill, which was about the extent of Mum's interest in the lyrics. In fact, she quite often didn't make it past the opening word - a loudly shouted "Ole!," which kept it simple for everyone who did not speak Gaelic but confused those of us who spoke absolutely no Spanish. [My sister] Vanessa and I translated the word as "Hooray!" But the meaning was clear either way. My mother was here, she was armed, and you bet your insurrecting Commie ass she was dangerous."

The tale rockets back and forth charmingly, with Nicola's childhood bumping up against Alexandra's current visits to holy family sites, with Mum's dreaded childhood fancy dress parties not preventing her from forcing similar ghastly arrangements on her own children, with the added frisson that you might be dressed up in some silly costume and bouncing down the road to a party but in Rhodesia you better be packing a gun in case rebels decided to attack.

Fuller shows her parents at old age, finally perhaps discovering a resting place in Zambia where they and the land and the people are at an uneasy peace of sorts. By that time we better understand a woman who attended boarding school and whose best friend as a child might have been a chimp, a woman who blithely champions people like Che Guevara (you know who she admires because she names her pets after them) but can't be bothered with "the people" themselves in all their pushy reality. Tragedy, war, struggle, lost children, hunting parties, lost wars, hasty retreats, lost countries, bouts of depression or madness or going "wobbly" if you prefer, and many many drinks -- war-ravaged Africa is, if not romantic, unquestionably vivid in these pages.

"Here's to us," goes one of Nicola's toasts. "There's none like us and if there were, they're all dead." Fuller brings her mother's world and society fully to life here, as wonderfully as she did in Don't Let's Go To The Dogs Tonight. If you liked that book, don't hesitate. If you're a fan of West With The Night or Out Of Africa, here's a far more complicated and modern look at the continent in all its bloody, confusing and addictive glory. Now no mucking about: Fuller's next memoir better be an Awful Book about her dad.

Note: Michael Giltz was provided with a free copy of the book in advance of publication. He receives far more books than he can cover, so they are provided without any guarantee of coverage.

Posted by Michael Giltz at 8:00 AM No comments:

"On Alfred Pond" Is Back!

Guest blogger Peter McClain has been away far too long with his musings on life in upstate New York. But a week volunteering at Vacation Bible School prompted Pete to put pen to paper (or is that "index finger to keyboard"? and share some tales far from Lake Wobegon but rather closer to Alfred, New York. (By the way, for those of you on the coasts, Vacation Bible School is like summer camp for evangelicals.)

Vacation Bible School (VBS) invaded Alfred Pond last week and yours truly was involved. I'd been able to hide behind Micah these past three years when volunteers were requested since we didn't want to stick him in the nursery for 3 hours every night for a week and being the dutiful dad I stayed home with him. Unfortunately, kids grow up (no matter how well you've malnourished them) and thus Micah was old enough to attend his first VBS. So, I volunteered to accompany a pre-K group through the nightly activities, which made me the only male crew leader of the youngest set. That, of course, made me a magnet for the most hyperactive boys searching for a father figure.

A night of VBS consists of an opening act where you sing some of the most mind-numbing songs (and "songs" is really a stretch since a better description would be "singing a chorus 10 to 12 times with a bridge tossed in if you're lucky"), craft time, bible story time, snack, craft, a section of a poorly produced 5-part movie (since something needs to keep these kids attention while they wait for Google+ to emerge from beta testing), and Rowdy Wrap-up, which is the same songs sung yet again. Needless to say, I woke up all week singing these choruses to the point where I was excited when Anne Murray's "Shadows in the Moonlight" was in my head Saturday morning.

This year's theme was Pandamania, which has about as much Biblical relevance as ice skating or a 3-foot tall, talking chipmunk, but we'll get to that later. I'm thinking the theme was dreamed up during the winter with an eye on the opening of Kung Fu Panda 2 Memorial Day weekend, fully expecting that Jack Black's form of crude humor would dominate the summer. Alas, that was not to be and we were left with a weird Asain theme and a play off the word pandemonium.

The curriculum connects a Bible story for each day, some of which work extremely well, like the stomach of a whale which was constructed out of large, black plastic sheets and inflated with two box fans. Others, missed the mark like the game Shark Attack the pre-K kids played where each child placed their legs under a parachute while a "shark" arbitrarily pulled the unsuspecting participants under. Within about 15 seconds the kids realized that they didn't want their legs anywhere under the parachute. Somehow that was supposed to teach us about Hannah. The closest I could come was perhaps the shark represented the temple priest who accused Hannah of being drunk. I wonder if drunk praying was the Biblical times version of drunk texting and the Levitical priests got tired of God honoring the incoherent prayers of the drunken yeshiva kids who came to the temple late at night. Anyway, we ended up playing Simon Says and Red Light, Green Light so I'm not sure the lesson landed.

Another staple of VBS is letting the kids all yell some phrase any time point of the day is spoken which is oddly similar to the word of the day on Pee-Wee's Playhouse with mobs of kids all screaming because everyone else is. I like to make a game out of this by finding the times when the daily phrase, such as "God watches over us" is said in mid-sentence when they aren't looking for the typical response. Especially humorous is interjecting a boisterous "Thank you, God!" during dialog in the 5-part movie which stars a 3-foot tall chipmunk named Chadder. SPOILER ALERT: The Pandamania version of Chadder's mystery series takes him to a panda preserve where all the pandas go missing and while helping he ends up getting spray painted white and placing his paws in black paint before wiping his eyes with said painted paws. The inspector loses his glasses and thinks Chadder is a talking panda until Chadder gets cleaned up and tells the truth. The culprit is the pink-clad daughter who can't stand pandas so much that she hides them in her room where we get to see the 5 worst CGI pandas in the history of moving pictures. They'd have been better off photoshopping in five pandas from a zoo. Just dreadful.

The highlights of the week were the unpredictable answers which the pre-K kids gave to serious questions asked by station leaders. On the first day, during Chadder's Theater with the day's theme being creation, my Micah was asked what his favorite animal was. His answer? Racecar. And why not?!? You think a cheetah's fast? See what 750 ponies under the hood can do! Later in the week, when asked during Bible Adventures what he wanted to be when he grew up, Micah emphatically answered, "Car." There's a kid who won't put God in a box!

Anyway, the week ended without any major incidents and the kids seemed to enjoy themselves, so I think it was a success. And I was able to escape the repetitive choruses which haunted my subconscious last week. That is, until yesterday's morning service where they invited the kids forward to sing a few of their tunes and thus I woke up this morning with those same refrains echoing through my brain. Time to turn on Pandora and hope for the best...

Thanks for sharing, Pete. Don't keep us waiting so long for your next column.
Posted by Michael Giltz at 9:09 PM 2 comments: