Books: "The Hypnotist: -- Wait For It -- Mesmerizes 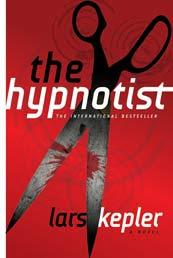 This new mystery thriller comes from a husband and wife team based in Sweden, so naturally it's being compared to The Girl With The Dragon Tattoo. But this is really an international book written for an international audience. It's movie ready with short chapters, vivid characters and enough twists and turns to keep pages turning.

Many mysteries feature damaged heroes but what may give this debut novel by the pseudonym Lars Kepler its own flair is the fact that virtually every character is deeply damaged in one way or another. Our hero is Detective Joona Linna. He's haunted by a tragic car accident and now simply cannot, will not rest until a case is solved. Linna also suffers from blinding headaches but when a case is on he skips his meds and lets the pain mount and mount so nothing distracts from the task at hand. He's so single-minded that Linna often leaves his glamorous girlfriend alone.

Linna is dragged into solving an horrific crime in which almost an entire family is brutally murdered but a 15 year old boy survives with hundreds of stab wounds. Time is running out because the boy's sister may be in danger and can't be found, but the boy is is barely capable of being questioned in the normal way. So Linna calls in...The Hypnotist.

That would be Dr. Erik Maria Bark. He swore never to use hypnosis again after some tragic event that haunts him. (Rest assured, we'll hear about it in detail.) Bark is addicted to painkillers and not sleeping with his beautiful wife, who hasn't forgiven him for a brief affair many years earlier. Their son is also wounded in a way: he suffers from a rare blood disease that means he must get weekly injections and can still die if jostled around too casually. The boy is finally dating a goth girl, who seems to be trying to pull away from a gang of aimless youth that terrorize the kids in their neighborhood. But are his parent too protective to let him have any fun?

When Bark is reluctantly pressured into using hypnosis in this crisis situation, you won't be surprised to hear it all spirals out of control. The madman who attacked that family is revealed and on the hunt. The missing sister is found but never feels safe. Bark's use of hypnosis makes national news and Amnesty International weighs in on his barbaric tactics. And then the hypnotist's son is kidnapped and any one of several terrifying suspects could be responsible. Soon we're plunged back into the past and Bark's controversial group hypnosis therapy sessions. He brought together all sorts of damaged souls, one of whom may be targeting him now for the sins of the past.

It's all pretty entertaining stuff, though regular readers of mysteries won't be thrown off by the red herrings. Mind you, herring served at a Christmas party and unusual street names are the only clues that this is set in Sweden. Either world culture is becoming unified or this book is geared towards a world audience. Certainly disaffected teens and psychopaths are the same the world over. A few missteps are soon brushed aside. (Early on, when a psycho has vowed to kill Dr. Bark and/or his family, wouldn't the cops simply go to Bark's home rather than just leave some frantic phone messages and leave it at that?) It's lean, amiable beach reading with Linna not quite center stage (much of the book is devoted to Bark and others) but an interesting character nonetheless. He has one annoyingly endearing quirk: Linna is always right and when he's doubted and proven right, he feels compelled to make his coworkers admit he was right and then says, "I told you so."

When this book becomes a bestseller and we get a sequel, just take it for granted that I'm thinking the same thing: I was right and I told you so.

Posted by Michael Giltz at 4:00 PM No comments: