Cole Porter's breakthrough musical Fifty Million Frenchmen is the sort of nonsense Broadway audiences won't tolerate anymore. The plot is frivolous (rich Boy makes a bet he can woo the Girl while pretending to be poor), the characters are cardboard and the songs are only loosely connected to the story. Sure, once in a blue moon Broadway will smile and accept a throwback like Crazy For You. But most of the time, even when it revives an old fashioned charmer like Oklahoma!, it prefers to dirty them up a bit.

So our only chance to catch a "lost" Broadway landmark like Fifty Million Frenchmen are ventures like Encores! and the York Theatre Company's Musicals In Mufti series. (Those are musicals done in "street clothes," i.e. casually and quickly so artists can jump in and audiences can get a sense of the show.) In this case, director Hans Friedrichs and his game cast had all of seven days to do a read-through, learn their lines, learn the songs, learn some dance moves and learn the staging and then before they've even had time for a coffee break they must get up onstage and perform it in front of a paying audience.

To be honest, they got a head start on this one. York's Executive Director Evans Haile (who handles Music Direction, first piano and is a friend) restored Fifty Million Frenchmen in 1991 for the 100th anniversary celebration of Cole Porter's birth. You can listen on Spotify to the marvelous all-star recording he made that year, named by USA Today as the best theater album of 1991. I agreed. (You can also buy it on CD.)

Whether you stream it online, buy the album or if you're lucky enough to head to the York and catch a performance, I'll bet you have the same reaction to this musical that I do....

Why the heck do we only get to hear silly love songs like this in shows made 90 years ago and performed on the fly?

Even casual fans will perk up at the Cole Porter standard that starts things off. "You Do Something To Me" (tackled by leading man Andy Kelso) is not as flashy or lyrically playful as other Cole Porter gems and it is not as tuneful as his best. Yet its casual charm (echoed a minute later by the tongue-tied "You've Got That Thing") wins you over. You're not supposed to start a show with your best song since late arrivals might miss it. But that's exactly what Porter does here.

Ardent cabaret-goers might recognize the humorous story song "The Tale Of The Oyster," put over nicely here by Kristy Cates. And yet the rest of the show is bursting with treats too. As a would-be chanteuse, Ashley Blanchet steamrolls over the dated bits of the silly "Find Me A Primitive Man" and positively lights up "I'm Unlucky At Gambling." The only shocker here is that she must capture her man, rather than having every man in the show chasing after her. And Karen Murphy nails the social climbing frustrations of her character Gladys with "The Queen Of Terra Haute." In a show with little on its mind, Murphy conjures a moment of poignancy and humor almost out of thin air.

Indeed, the women beat out the men from start to finish. Men are all well and good for paying the bills and wrapping around a finger, but the women were in charge at the York. They all certainly had good songs to work with. In truth, you won't find a weak number here -- even the scene-changing filler was sharp, funny and pretty darn winning. Porter on the rise is a lot more fun than most other composers at their peak.

Unsurprisingly, the casual nature of the evening calls for understanding from the audience when it comes to this or that moment or a rushed bit of business. No matter. All can be forgiven in this sort of presentation, where the cast carry the script and score on stage with them, just in case. And while it's silly to argue over the plot in a show like this, isn't the Boy cheating when he tells the Girl, "Hey, just marry me! I'm super rich!"? Silly me, I thought she'd marry for love and then discover her dumb good luck. Perhaps Porter was already too worldly for that.

Happily, Fifty Million Frenchmen is the first of three shows in the next six weeks at the York celebrating Cole Porter. After eleven performances of this, they tackle the 1965 revue The Decline and Fall Of The Entire World as Seen Through The Eyes Of Cole Porter. And right after that, they tackle the Ethel Merman vehicle, Panama Hattie. Undoubtedly, it'll be a swell party.

Posted by Michael Giltz at 12:23 AM No comments: 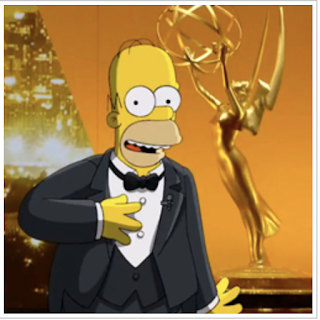 How is it that an awards show honoring the best and brightest talent and content on television always winds up being such a poor representation of the medium? We’re talking about the Emmy Awards, which were handed out this past weekend in a ceremony without a host. While it was nice to see a few new honorees take home trophies, the proceedings themselves were rather dull. We try and figure out why.
Meanwhile, in the music business Live Nation and Ticketmaster are once again being scrutinized by the Department of Justice for antitrust. It doesn’t help that the company’s latest attempt to thwart scalpers left some fans of the Black Keys holding worthless canceled tickets.
Speaking of music, Amazon is raising the bar for streaming services by offering a Hi-Def streaming tier with lossless audio. Even the notoriously fussy rocker Neil Young is hailing the move.
Of course we also cover the week’s top entertainment headlines including how “Downton Abbey” spurred adults into cinemas, French courts claim you have the right to resell your legally purchased digital content and screenwriters take a big stand in their dispute with talent agencies.
Showbiz Sandbox is up and running! Catch it if you can!
Posted by Michael Giltz at 5:16 PM No comments:

Here it is! The latest Showbiz Sandbox podcast hot off the press and ready for your ears!