HANS CHRISTIAN ANDERSEN: TALES REAL AND IMAGINED * 1/2 out of ****
THE DUKE ON 42ND STREET

Proving how rich and varied the theater world is in New York City, the Ensemble for the Romantic Century is celebrating its 18th season (still high off the critical acclaim for their show Van Gogh's Ear) and yet somehow I've never seen any of their 40 or so productions. The company is known for creating atypical bio-plays that combine live classical music with the story of historical figures such as Emily Dickinson, Arturo Toscanini and the painter Vincent Van Gogh. In the case of the Danish writer most famous for fairy tales like "The Emperor's New Clothes," "The Snow Queen" and "Thumbelina," they're even incorporating puppetry.

Owning an insane amount of folk and fairy tales (not to mention loving puppetry), I am perhaps the ideal adult audience member for this show. Sadly, it's a noble failure of the sort one would expect of a bio-play celebrating an historical figure. The odd twists and turns of Andersen's celibate life, the fine performances of pieces by Britten and Purcell among others and the sheer commitment of all involved make this a noble failure, but a failure nonetheless.

Written by Eve Wolf and directed by Donald T. Sanders, the show tells of Andersen's life from start to finish, making every dutiful stop along the way. Born into poor circumstances, Andersen hightailed it to Copenhagen at the age of 14 and lucked into a spot at the Royal Danish Theatre. That led to Hans impressing the head enough to land the lad a thorough education, funded by King Frederick VI no less. And up and up he went; rubbing shoulders with the high and mighty; writing pieces of theater, poetry, travelogues and yes fairy tales, the stories which slowly but surely made him world famous.

Andersen might share dinner with Charles Dickens but he never found similar success in his private life. He shunned his mother and sister as undesirably lower class, he yearned for acceptance from the aristocratic family that semi-adopted this stray of a child but never took him to their breast and he chastely yearned for men and women who clearly did not reciprocate his affections. Gay? Straight? Bisexual? The one thing most biographers agree on is that Hans died a virgin. 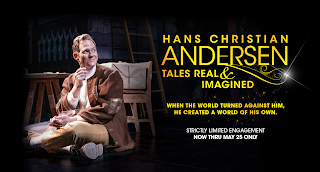 Frustrated sexual desire, social climbing, world fame eclipsed by private shame -- Hans Christian Andersen was a complicated man. While the details of his life are revealed, the play never turns them into dramatic fare. Most of his fairy tales are glancingly referenced, with only "The Ugly Duckling" (as autobiographical as it gets for him) and "The Little Match Girl" incorporated more fully into the show. Hans obviously identified with the maligned creature who blossomed into a swan. And the inexplicable climax of the play involves a silent reenactment of that heart-tugging fairy tale about a beggar girl freezing to death on New Year's Eve.

Bald statements about the life of Andersen are interrupted by so-so puppetry or fine performances of classical pieces arranged for two pianos and percussion along with a counter tenor. Arvo Pärt seems the odd duck here, alongside a program dominated by Purcell, Britten and one apiece by Igor Stravinsky and Samuel Barber. Still, that deeply religious Estonian composer is a personal favorite and a pleasure to hear. Nonetheless, I struggled to make any connection between the music and the story of Andersen's life, turning them into welcome but puzzling respites from the dramatics.

A better show would have the fairy tales revealing the soul of this sad writer more effectively with the music underscoring the action with purpose, rather than the randomness in selection I felt here. While the puppetry is by and large forgettable, the musical performances are solid. And the acting by leads Jimmy Ray Bennett and Randall Scotting (who also doubled as the singer at the performance I saw) were solid. Bennett showed Andersen's insecure name-dropping and craving for acceptance without making him too pathetic, no small task. Scotting (in multiple roles but especially the object of affection Edvard) was just as assured.

Yet even the ending is bungled, with a perfectly fine last image returning us to where the show began trampled on by an unnecessary coda declaring that the fairy tales of Hans Christian Andersen would live forever. Yes, we know. A better show would make that point without having to announce it so baldly.

Posted by Michael Giltz at 5:47 PM