THEATER: "Ink" -- The Art of Calligraphy, Performance and Friendship

UNDER THE RADAR FESTIVAL: INK -- A PIECE FOR MUSEUMS ** 1/2
THE METROPOLITAN MUSEUM OF ART

Have the performance duo/art experts James & Jerome created  a new form of lecture for museums around the world to adopt? A sort of Ted Talk for tapestries and the like? Not really.  I mean, how many people are out there who can hold a stage, speak authoritatively and entertainingly about art and art  history, weave in personal anecdotes, compose beautiful music, play multiple instruments and dance with insouciance? Heck, I'm not even sure James can dance with insouciance, so it takes two here. With Ink, the combination of their talents has created an engaging piece that surely will be welcome at museums around the world.

Their show is broken into five parts. Jerome Ellis kicks  things off with the story of a sabbatical he took away from his friend and collaborative partner James Harrison Monaco. Inspired by a book, Jerome decides to make his own ink. Before you know it, we're off into the history of ink and calligraphy and illuminated manuscripts, scored by music one or both of them perform throughout and backed by projections of various art pieces.

And it is a story. Jerome has a stutter and explains how early on in their friendship he asked James to introduce Jerome to others, saving him the hurdle of repeating his own name. "James gave me my name back hundreds of times over the last ten years," he says. Just like that, they set a pattern.  A close but playful examination of a signature of Suleiman the Magnificent flows into some hypnotic music which leads to more personal comments (such as how the two bonded by spending endless days at the Met soaking in their favorite works together) back to music (maybe with Jerome soloing on the flute or sax)  and back to art history.

Is it an art lecture? A performance piece? A musical concert? Yes. 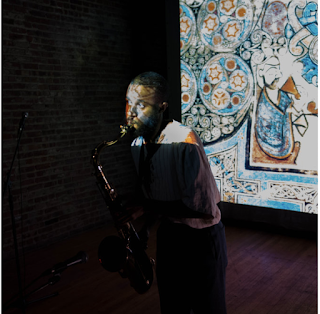 Jerome's stutter adds an element of drama to the show. Once the audience realizes  he is not "performing" but simply working to communicate with them, they are immediately on his side, rooting for his thoughtful comments and compelling voice to come as easily as he wants, while patiently making mental room when it doesn't. (Anyone who has seen the British performance artist and comic Daniel Kitson will recognize this phenomenon.) James becomes a helpful counterpoint, contrasting their styles of storytelling and giving both Jerome and the audience a breather. This only adds to the sense of warmth between them and the people hearing their story.

This is good since Ink would otherwise lack tension and be merely a lecture with modest anecdotes woven in. No natural suspense arises from the stories shared or information presented, however compelling they might be.

Naturally, their comments are illustrated throughout with images of art. (Media Designer Shawn Duan is the third key element of the show, which was directed by Rachel Tavkin and Annie Tippe.) From Part II onward,  each piece of art projected on the screen was spoken about directly or obviously related somehow to the moment. Not so in Part I, where Jerome  set up his story and their friendship while seemingly random objects were displayed behind him. Undoubtedly they have significance, but that remained  obscure at least to me. A similar disconnect seemed to reoccur with the last few images of the show, though that was so minor it just be my fault. The visuals  and music came together perfectly however when Jerome would step in front of the projections while dancing or playing an instrument, literally becoming a part of the art they so love.

Lastly, an unintentional odd note was struck at the finale. Jerome said something akin to, "I think I'd like to finish this alone" and James left the stage. Clearly this was planned. Perhaps they have several options at the end, depending on the mood, their desire to change it up or Jerome's  temperature-taking of how his speech is flowing and whether he wants to tackle one final bit or pass it off? I've no idea but one thing is clear: James wasn't being "dismissed." But the way that transition was voiced added a discordant note; it should be handled differently in the future.

Just as clearly, this piece will indeed have a future at any museum James & Jerome want to visit. The only pity is that those future audience members won't be able to follow the show by immediately heading upstairs at the Met to check out most of the key pieces mentioned in person with a new appreciation.


Thanks for reading. Michael Giltz is the creator of BookFilter, a book lover’s best friend. It’s a website that lets you browse for books online the way you do in a physical bookstore, provides comprehensive info on new releases every week in every category and offers passionate personal recommendations every step of the way. He’s also the cohost of Showbiz Sandbox, a weekly pop culture podcast that reveals the industry take on entertainment news of the day with top journalists and opinion makers as guests. It’s available for free on iTunes. Visit Michael Giltz at his website. Download his podcast of celebrity interviews and his radio show, also called Popsurfing and also available for free on iTunes.
Posted by Michael Giltz at 1:26 PM