Books: "The Buddha In The Attic" Is A Find 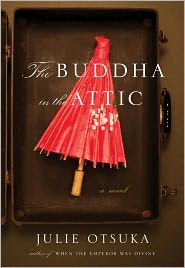 I read this book in one gulp on a plane flight from London back to New York City. Then I went out and bought author Julie Otsuka's debut novel When The Emperor Was Divine. Then when the final hardcover edition of The Buddha In The Attic appeared in my mail, I read it again. It comes in a trim, smaller format that's perfect for this precise, focused work of just 129 penetrating pages. The jacket design by Gabriele Wilson is clever and eye-catching, the prose almost forces you to use words like "gem" and "pearl" and it has that feel of a book destined to become a bestseller. See it and you'll want to pick it up. Start reading it and you won't want to put it down.

But this suggests a modest endeavor when Otsuka's novel is anything but. It's a boldly imagined work that takes a stylistic risk more daring and exciting than many brawnier books five times its size. Even the subject matter is daring, for Otsuka's acclaimed debut told a story about the internment camps where Americans of Japanese descent were forced to relocate, uprooting and destroying their lives while Americans with German or Italian descent were essentially left alone. That book became a bestseller and quickly worked its way onto high school reading lists, which is a testament to the book's accessible prose. The subject matter surprised me, for Otsuka's new book leads up to that same, shameful event in American history.

That's where the similarities end. Emperor gathers strength by focusing on one family: a husband who is dragged away in the middle of the night; the wife he left behind and their two children, the three of whom are sent together to a camp.

In contrast, The Buddha In The Attic takes place in the decades between the wars. Instead of one family, it focuses on a community of Japanese picture brides who travel to San Francisco to be married off to husbands they've never met before. The distant, reserved voice of the narrator mirrors the reserve of many of these women overwhelmed by a new world, a new culture and of course married life itself. It begins on the ship taking these bewildered, excited, nervous, brave and scared women on the longest journey of their lives.


On the boat we were mostly virgins. We had long black hair and flat wide feet and we were not very tall. Some of us had eaten nothing but rice gruel as young girls and had slightly bowed legs, and some of us were only fourteen years old and were still young girls ourselves. Some of us came from the city and wore stylish city clothes, but many more of us came from the country and on the boat we wore the same old kimonos we'd been wearing for years -- faded hand-me-downs from our sisters that had been patched and redyed many times. Some of us came from the mountains, and had never before seen the sea, except for in pictures, and some of us were the daughters of fishermen who had been around the sea all our lives. Perhaps we had lost a brother or father to the sea, or a fiance, or perhaps someone we loved had jumped into the water one unhappy morning and simply swum away, and now it was time for us, too, to move on.

This mesmerizing opening paragraph shows Otsuka's approach at its best: specific, clear, multitudinous in its grasp and subtly emotional. She maintains this level throughout. Some of the girls flirt with sailors on the boat, some get seasick, some feel fine right away, some are worried that their husbands will realize they're not "fresh" and all of their thoughts and desires and fears are captured in prose. The book follows them off the boat and slowly, almost to your shock, you realize that Otsuka is not going to focus on one or two women or even five or ten. She keeps her eye on the entire community, never once letting anyone fall from her grasp.

This sounds like it should be frustrating. Off the boat, some of the women are working the fields alongside their husbands, others are beaten cruelly and run away, some work in town as maids for white women, others work as prostitutes, some are happy, some are sad, some are not sure how they feel. At every step, the women make decisions (or those decisions are made for them) and that takes them off into an entirely new world of possibilities. And then it happens again and again, a constant branching out of lives and Otsuka limns them all.

This is remarkable on several levels. On the level of pure craftsmanship, it's exciting to see a writer make such a bold move and succeed so brilliantly -- like watching a juggler who keeps adding ball after ball to the stream of objects they keep in the air. Each vignette, each story is so riveting, you want to stay with that character. But Otsuka moves on. If at any moment the next story and character wasn't so enthralling, you would immediately resent this and want to return to the previous thread. But that literally never happens, You're pulled inexorably forward by wave after wave of event.

On another level, it's an exceptionally appropriate way to capture the lives of immigrants. By refusing to focus on one or two or even a dozen "typical" people (a lesser writer would have three or four main characters, with one bride heading to the city, one to the country, one off on her own and one into prostitution), by constantly unfolding the endless possibilities of life, Otsuka reminds us that the immigrant story will always be immigrant stories. They're as varied and wonderful and heartbreaking as anyone else's life and never follow a set pattern.

Looming over it all is World War II and the internment camps we know are coming. This is quietly devastating because Otsuka has done such a masterful job of showing us how specific and varied and diverse all these people are. So when they're suddenly and brutally treated as foreigners, lumped together no matter how dramatically different they may be from one another, the injustice of it is doubly striking.

Few writers this year will take the risks that Otsuka does in The Buddha In The Attic. And I doubt any of them will do it in a novel so accessible and rich that it's sure to be a favorite for casual readers and critics alike.


NOTE: Michael Giltz is provided with free copies of books to consider for review. He typically does not guarantee coverage and invariably receives far more books than he can cover.

Posted by Michael Giltz at 11:00 AM No comments: