Oh the mystery of chemistry. Two actors can be happily married in real life and yet on camera or onstage...nothing. The reverse is true, of course. Two actors can despise each other and yet sparks flies on stage and on film. You never really know what will happen until they actually share the same space and put in some work. More's the pity. When you're casting actors of the fame and calibre of Keri Russell and Adam Driver, they don't audition. Of course not. But they also don't sit together in a room and check to see if they're compatible, if they can feel that electric charge, that extra intensity that says "We've got something here." Maybe they should.

Lanford Wilson's Burn This was the last major success of the Pulitzer Prize-winner who helped revolutionize Off Off Broadway. Over the years, it has dimmed in the collective memory, now usually seen as a flawed play galvanized by Joan Allen and especially John Malcovich in a legendary, barn-burning performance. Any revival worth its salt hopes to redeem a show's first success or rescue a work from such retrospective downgrading. After 20 years away from Broadway, Wilson will have to wait for redemption. The utter lack of chemistry between the two leads makes the play confusing to newcomers like myself and leads to all sorts of lazy puns on a production not catching fire.

Russell is Anna, a young choreographer in the world of modern dance who shares a loft-like apartment in New York City with two gay men while dating a wealthy screenwriter. One of her roommates has just died tragically and she returns home, having endured a funeral where it was clear the family never saw their dancer son strut his stuff, can't or won't admit he was gay and prefer to pretend Anna was the dead  man's lover. She pours this out to her boyfriend Burton (David Furr) until her gay pal Larry comes home (Brandon Uranowitz, having the most fun in the cast) and pours it all out again to him. At least the worst is over. 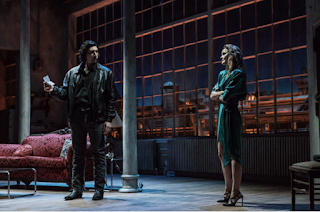 
But it's not. Late in the first act, late at night, Pale begins pounding on their door. Pale (Adam Driver) is the brother of the dead dancer and he's nominally there to pick up then guy's stuff. But Pale is drunk and belligerent, a motormouth who can't stop complaining in blunt, blue collar terms about the city, the streets, about parking and what about a drink and Anna sure is good looking. Sparks -- at least on the page -- fly.

Now in the play I saw, Pale is a thoroughly unappealing louse. Of course he's not Anna's type (not officially anyway), but he really doesn't seem anyone's type. He's dressed like a slob, but is obsessive about his pants being kept spotless. Pale wears silk shirts of the sort a low-level thug in the mob might wear thinking it's classy. He's the manager of a restaurant and I think he said it was in Jersey and I thought, well it wouldn't be in Manhattan, not this bruiser. When Larry says he's been to the restaurant (twice) and it's quite good, I'm surprised. Looking at him, you'd expect he manages an anonymous Italian restaurant with cheap house wine.

Pale is definitely a character. He's loud and tiresome and drunk and angry and maybe sort of sad about his brother dying and maybe you feel a little bad for him but mostly you just want him to go away. Then he's sitting on the couch with Anna and they're talking and he puts his arm around her and you freeze up. Yikes, he's totally misread the situation and how is she going to get out of this him exploding or hurting her or worse? To my surprise, she doesn't want to -- indeed she's eager to make love to him. That one night stand becomes -- against her better judgment -- an ongoing fling that threatens to end her relationship with Burton (naturally) but finally unleashes her imagination. Anna's choreography has never been better because she's finally feeling something.

Later I read the script and discover Pale is supposed to be inescapably sexy, a rough Brando-esque of a beast that may be rough and angry but my god women want him. He's supposed to be a very good dresser (clearly costumer Clint Ramos went in another direction) and these mismatched lovers are fated to be together. Yet that magic something, that chemistry that is utterly lacking in these two acclaimed actors left me utterly at sea. Nothing they said or did made sense because I never thought for a second they wanted each other. Eventually, the entire play felt forced. Uranowitz made the most of his cliche of a "funny gay roomie" but even he can't make sense of his character quoting an old movie and shaking his ass at a climactic moment.

Just as impenetrable to me is Anna's relationship with Burton; they don't seem to have any particular chemistry either. We know he's rich and eventually we learn he's asked her to marry him several times. Even that is a surprise, since their relationship just doesn't feel that significant. If we're meant to believe he's the safe pick or the compromise pick of Anna, that doesn't track either -- not because he seems so great but because it's hard to say what she thinks of him at all. And while Pale is an obvious sort with no hidden depths, who is Anna? Larry "explains" her to Burton late in the show -- he says she's never had to carry her own passport or plane ticket. Huh? She's rich too? Other than a brief reference to her fancy childhood neighborhood, we don't have the slightest sense that she's wealthy or sheltered or privileged to any particular degree. And if she is, the lure of Burton is surely lessened. Who needs him?

Even the music cues are confusing. It's mostly a parade of 80s era songs (Yes's "Owner Of A Lonely Heart," Roxy Music's "Avalon," Bruce Springsteen's "I'm On Fire" and so on) keying us into the late 1987 time period. The parade of tunes sets the tone for the entire evening, long before the play even starts. But at the last second they drop in a killer: the moody classic "Pink Moon" by Nick Drake. It's a great song and it's played just as the lights go down and the play begins. If anything is supposed to tip the show's hand, to say "This is what we're about," playing a particular song just as the show begins should be it. But it's most assuredly not a key track from the 1980s, having been released to zero attention in 1972 and finding belated success in 1999 via a car ad. More to the point, unlike every other song they play, it's not by any stretch a love song. I'm not sure they even know that.

So does this mean the reputation for Burn This should fall further? Not really, not based on a single revival that doesn't work and at least in part for a reason that has nothing to do with the play itself. If they do it again in ten years and it fails again, then maybe Wilson's final success will slip further in our estimation. Happily, his key role in making Off Off Broadway viable will remain.

Thanks for reading. Michael Giltz is the creator of BookFilter, a book lover’s best friend. It’s a website that lets you browse for books online the way you do in a physical bookstore, provides comprehensive info on new releases every week in every category and offers passionate personal recommendations every step of the way. He’s also the cohost of Showbiz Sandbox, a weekly pop culture podcast that reveals the industry take on entertainment news of the day with top journalists and opinion makers as guests. It’s available for free on iTunes. Visit Michael Giltz at his website. Download his podcast of celebrity interviews and his radio show, also called Popsurfing and also available for free on iTunes.
Posted by Michael Giltz at 5:20 PM