THEATER: "THE CRADLE WILL ROCK" PUTS YOU TO SLEEP

Our New Gilded Age is surely the perfect time to resurrect Marc Blitzstein's The Cradle Will Rock. But time is not kind to agitprop in general or this pamphlet of a show in particular.  Like me, you may long to be roused, ready to look for the union label, mount the barricades and get fired up over injustice. But a lack of drama, character or story leaves nothing here but long speeches and short sketches. Worse, the fatal lack of melodies for the handful of songs on hand won't even let you walk out humming a catchy tune. Is harmony too bourgeois?

It's a landmark show, of course, whose premiere (directed by Orson Welles!)  proved electrifying for how it was performed (rather than the show itself). That story is so famous it inspired a so-so film about it by Tim Robbins. This "play in music" (a musical ain't serious enough, I guess) was the first in Broadway history to garner an original cast recording. And now I know why -- despite all this laudable backstory-- the show itself is rarely performed.

We begin with a desperate woman on the streets, ready to sell herself for half a buck. But the man Mol solicits says that's too much. What's a human's body worth? Not much more than a human's dignity, apparently. A cop breaks up this sad affair, only to pressure Moll (Lara Pulver, who played the woman from Sherlock) into having sex with him. She refuses, he tosses her into the clink and a passel of local dignitaries are  bundled into jail as well. They're anonymous members of the Liberty Committee, middle-class  toadies who do the bidding of Mr. Mister in "Steeltown, U.S.A." This already sounds like more plot than we're given: everyone is a type, a cardboard cutout  for damning or praising and no one is better at both than Larry Foreman (Tony Yazbeck), the man urging workers to unite  so they can stand up for decent wages and safe working conditions. 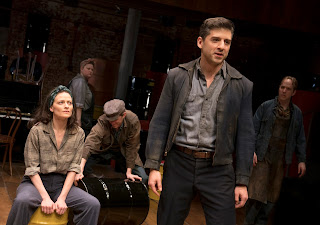 A mock trial ensues, with little vignettes depicting doctors, educators, religious leaders, artists and anyone else you can name  knuckling under to Mr. Mister (David Garrison) out of avarice or fear. That manipulator showers the stage with so much cash, you feel half the show is spent with people on their knees scooping up piles of dough. Frankly, times are so hard and the bills on display so realistic looking, I was half tempted to join them.

Speeches can be entertaining and informative. Not The Cradle Will Rock, which states the obvious in as obvious a fashion as possible and then restates it again for good measure. Director John Doyle does exactly what one would expect -- he directs fluidly and simply, with oil drums stacked up or slapped down to serve as seats, while the cast moves about and enacts their various fables. Seemingly everyone can play the piano located near  the back of the stage, so thank god there are no union rules insisting they can't each pitch in when needed.

The actors are mostly capable and do what they can. Rema Webb garners the only applause of the night for a song, thanks to her strong voice; Garrison's icy exterior matches the icy heart of Mister and Eddie Cooper offers about ten shades of conflicted in each scene he inhabits.

Pulver and Yazbeck get the bulk of attention. She proves very appealing, even though her would-be sex worker  is quickly reduced to the sidelines, watching others act out their falls from grace while she looks hopefully towards  the future. Yazbeck however is quite stirring as first a broken man and then the rabble-rousing union organizer  Foreman. Blitzstein gives him nothing but speechifying but that speechifying can be damn persuasive in the right hands. Yazbeck is fiery, funny, moving and shakes up the evening as much as he can. He lights the fuse; unfortunately there's not enough explosive material on hand to make any noise.

Thanks for reading. Michael Giltz is the creator of BookFilter, a book lover’s best friend. It’s a website that lets you browse for books online the way you do in a physical bookstore, provides comprehensive info on new releases every week in every category and offers passionate personal recommendations every step of the way. He’s also the cohost of Showbiz Sandbox, a weekly pop culture podcast that reveals the industry take on entertainment news of the day with top journalists and opinion makers as guests. It’s available for free on iTunes. Visit Michael Giltz at his website. Download his podcast of celebrity interviews and his radio show, also called Popsurfing and also available for free on iTunes.
Posted by Michael Giltz at 11:01 PM