I love the epic. The Inheritance just won the Olivier for Best Play and I can't wait for that six hour AIDS drama to come to New York. I admire the manic. A stream of new shows are as influenced by In Living Color and Monty Python as Oscar Wilde, with Ain't No Mo' at the Public the latest, thrilling example. But let's hear it for restraint, for not going overboard, for stopping far short of the kitchen sink and being all the more powerful for it.

That's my reaction to the subtle, funny, absorbing and spot-on new play Mrs. Murray's Menagerie. Directed and acted to quiet perfection, it's a pitch perfect execution of a simple idea. The setting is the 1970s and we watch as six varied adults take part in a focus group. They're all parents and all fans of the children's TV show Mrs. Murray's Menagerie. That beloved series combines live actors with puppets a la Mr. Roger's Neighborhood and after a long run, it's coming to an end.

The adults sit around a table and are led in a discussion of the show they love and two potential spin-offs. Mrs. Murray is played by a black woman and the focus group is notably diverse, featuring three men and three women that amount to a nifty microcosm of society. Race, needless to say, rears its head. So does gender and class and child rearing and a dozen other ideas, all of them embedded in the story so simply and naturally you never really feel they're being raised at all. They're just...there, as in life.

Created by The Mad Ones and the ensemble with Ars Nova, the show is directed by Lila Neugebauer so invisibly that you half believe the audience is sitting behind a one-way mirror  and watching an actual focus group. Without histrionics, without a big explosion, without tossed-back chairs or collapsing walls, Mrs. Murray's Menagerie creates a tension and believability and empathy far noisier shows will never know. 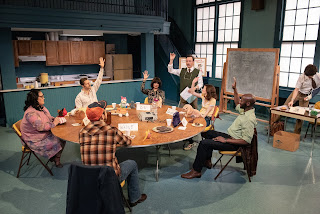 Like a play set in a jury or hospital waiting room or stalled elevator, throwing a disparate group of people together to see what happens is a time-proven dramatic device. Nonetheless, watching these particular people debate the finer points of a kid's show and the behavior of various puppets is fascinating. We come to know them without anyone revealing much of anything about themselves.

Typically, I'd go down the cast list and describe the actors and characters. While it seems silly to discuss spoilers in a show where very little happens, much of the pleasure comes from discovering who these people are and making up your own mind about them, rather than me tipping you off that this person is kind of a jerk or that person has low self-esteem. (Mind you, I do have very strong opinions now on Mrs. Murray's Menagerie. Why the heck isn't the spin-off being built around the human librarian everyone loves?)

Just trust me that this is an ensemble in every sense of the word and each actor is doing exceptional work. Director Neugebauer works with them and a terrific creative team to create one of the most finely tuned productions I've seen in ages. My guest referenced Clybourne Park and I thought of the Bobby Steggert drama Boy -- not because they have so much in common, but simply because they are all shows that succeeded so well on every level.

Of course, we're trained to expect High Drama. Even though I admired the restraint, I instinctively wondered if -- as good as it is -- the plot might have pushed itself just a little bit further, increased the confrontation that little bit more? No, they hit it right. A hand on a knee creates an uncomfortable moment...but not the #MeToo calling out you want, which you know almost never happens. Answers to questions from the moderator become passive aggressive taunts, but other than a sidelong glance, no one says anything. At the end, the adults go  their own way and each goodbye feels weighted with meaning. One departure is hilarious, another just as jerk-ish as you'd expect, and a few are heartfelt -- the goodbyes of people who sort of made a connection but know they'll never see each other again. Just like life.

This is miles away in tone from Underground Railroad Game, the Ars Nova hit which returns to NYC for about two weeks from May 30-June 15. But just like that success, this will surely be remembered as one of the best plays of the year.

Thanks for reading. Michael Giltz is the creator of BookFilter, a book lover’s best friend. It’s a website that lets you browse for books online the way you do in a physical bookstore, provides comprehensive info on new releases every week in every category and offers passionate personal recommendations every step of the way. He’s also the cohost of Showbiz Sandbox, a weekly pop culture podcast that reveals the industry take on entertainment news of the day with top journalists and opinion makers as guests. It’s available for free on iTunes. Visit Michael Giltz at his website. Download his podcast of celebrity interviews and his radio show, also called Popsurfing and also available for free on iTunes.
Posted by Michael Giltz at 9:54 PM