THEATER: "Unchilding" Gets Shakily On Its Feet

UNCHILDING ** out of ****
DIMENNA CENTER FOR CLASSICAL MUSIC

The world premiere of Unchilding presented a piece that is clearly a work in progress from a director striving to find a unique voice...or at least one that suits this particular project. It's downtown in every sense of the word and you'd normally expect to stumble across it at La Mama (which gets a thanks in the credits) or in a raw loft space surrounded by hipsters where someone hands you a leaflet with credits run off by a pal at Kinkos who did it for free.

Instead it's staged at the handsome Dimenna Center with a cast of 26 onstage (more provide voice work for pre-recorded dialogue), a very classy booklet complete with cast photos and the entire night thoroughly documented (two or three cameras filmed the performance while still photographers discreetly took pictures of the audience). Director/creator Joshua Kaufman is either independently wealthy or has a gift that major talents often have for getting others on board with their vision. It was all a little head-spinning and discombobulating, from the multi-media tech work (all exquisite, which means they meant to have a bright light blaring down on us from behind until the performance began) to the is-it-over finale that left the audience uncertain if it was really done even after they clapped.

None of this matters, but it provides the context for what was an interesting, uncertain 50 minute performance piece. It uses one-act plays by John Walter Howley as the building blocks for Kaufman's show. Basically, Kaufman recorded dialogue from these plays (they may be performed in full, but I don't think so). That provides a soundtrack for the action on stage. In dim light, other actors (not the ones who recorded the dialogue) come onto a bare setting of wooden platforms and stage tableaus, each of them essentially frozen into place and staring off with focused intent. Once they are in position, the soundtrack begins to play and the story starts.

So while we're hearing two short plays presented almost as radio dramas, we watch people onstage embodying those characters without moving or emoting much if at all. The first story involves soldiers trapped in a building and cut off from their main company. The second story involves a sister and brother struggling to get by in a fishing town when a rough but well-intentioned local man asks the sister to marry him. I'm not sure why these particular plays needed this particular presentation (which is unconventional if not unheard of). While it didn't pay any particular dividends, I will say it didn't not work. 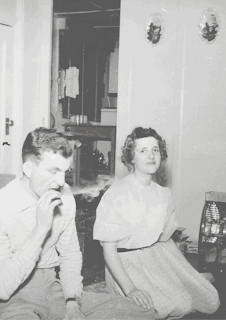 (Uncredited image from the Unchilding program)

A few thoughts occur. The setting of the first story was less clear to us and the audio mix of the dialogue and action dropped the ball a little. When a soldier goes upstairs to keep watch, we were a bit adrift. Are they in a cellar? On  the first floor, with the lookout on the second? When gunfire erupts, it took a minute to be told what had happened, which was far from what we imagined  based on the soundscape. And the ending was abrupt and unsatisfying. No such problem of setting arises in the second story, which takes place in a shack by the water. The sound of water and perhaps a seagull and we're there. The story was also stronger, thanks to a clearer conflict and climax.

Kaufman's presentation of the two dozen+ actors should be bolder and more frequent. His soldiers were poised in a useful tension at first. And the new recruit rising up unexpectedly (and nervously) from beneath the wooden platforms was probably the best flourish of the night. Similarly, a wordless scene was staged between the two playlets. It didn't precisely have anything to do with what came before or after but it was memorable. More of that was needed to flesh out what the audience actually watched. Instead, we had a staging and a visual presentation that was straightforward but not always arresting. Having a group of townspeople with their backs to the audience and then turning to face us/the characters at a key moment of guilt in the second story was far too nail-on-the-head. It didn't help that this obvious choice was also the biggest, hardest to miss moment of the night.

What really didn't work was Kaufman's interest in the grotesque. The fisherman who comes a -courting in the second tale? He's wearing a very effective bit of makeup/mask that makes him appear to have six eyes, like some mythological creature from The Odyssey. It certainly looked striking, but after the initial impact you spend most of the scene half-listening to the story and half-wondering why precisely Kaufman decided the mask was a good or interesting idea. It doesn't need to make sense or be explained, exactly, but it didn't register effectively on a subconscious level either. (The other grotesque touch perhaps did, but it too felt too obvious and too much.)

While the evening was appropriately about 50 minutes long, the simple fact is that an evening of just two vignettes simply doesn't work. You need at least three vignettes...or the two vignettes need to be more specific and strong tales, more like two one acts than what we had. That and adding some more of the unexplained but effective tableau that separated the two stories would give this work a shape and purpose and form it lacks now.

Nonetheless, Kaufman marshaled dozens of people and impressive resources for this piece. He and his casting associates found a strong group of actors who brought presence to the stage, especially Michael James Fry as a crusty soldier, Hannah Crane (I believe) as Laura (the sister being proposed to) and whichever actor embodied the raw recruit in the first story. (The actors who played specific roles on stage are not ID'd as such.) Indeed, the actress playing Laura added immeasurably to the emotional impact of the second piece with nothing at her disposal but her eyes and her intensity.

The hardest part of creating art that needs a team effort like theater/performance is just making the damn thing happen, convincing others with talent you have a vision and that they are going to want to be part of making that vision happen. At that, Kaufmann most certainly succeeded.