I've been waiting 36 years to see the documentary film Say Amen, Somebody. It was worth the wait. Check out my review at Book and Film Globe.

It’s a miracle! In the last six months the Lord has graced  us with not one but two amazing films about gospel music, both of them mentioned with reverence but virtually unseen for decades. 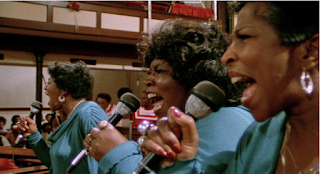 First came the Aretha Franklin concert film Amazing Grace. Director Sydney Pollack filmed it in 1972…and it promptly disappeared down a rabbit hole of technical and legal difficulties. As the music Franklin recorded became the best-selling gospel album of all time, the legend of this long-lost film grew and grew. Surely no movie could match the hype. But it did. Finally released in April, Amazing Grace immediately made a name for itself as one of the great concert films of all time. 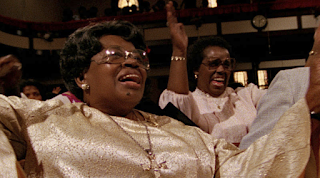 And if that didn’t save the soul of some cynical film critics, here comes the 1982 documentary Say Amen, Somebody. Roger Ebert and Gene Siskel raved about it on their TV show. Numerous outlets (including Rolling Stone and People) named it one of the best films of the year. Theatrically, it grossed a very impressive $1.1 million in North America (a LOT of money for a documentary film in those days). Then it disappeared....
Read more at Book and Film Globe now!
Posted by Michael Giltz at 11:00 AM