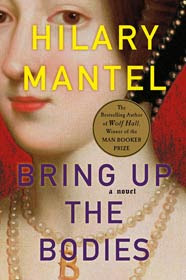 Hilary Mantel's Wolf Hall was the literary event of 2009, winning the Man Booker prize, breaking onto the bestseller list and ultimately becoming inescapable. Simply everyone read it and loved it. Mantel's accomplishment was multifold: she brought history to life, turned the very familiar event of Henry VIII dumping his wife for Anne Boleyn into a nail-biting political thriller and upended our image of Thomas Cromwell from a villain who persecuted the saintly Thomas More into the most modern and likable of men.

She does it all again with Bring Up The Bodies, the second of what Mantel now promises will be a trilogy of tales about Cromwell. (The third book will be called The Mirror And The Light and it can't come soon enough.) It is just as good as Wolf Hall and if I couldn't help myself and started casting the movie (surely Gary Oldman and the team behind Tinker Tailor Soldier Spy would be marvelous with this intrigue?) don't think this is a film or play waiting to happen. (Though it would be a fine riposte to the musty A Man For All Seasons.) It is a novel both literary and page-turning and confirms her status as a writer of the first rank.

The sheer audaciousness of what Henry VIII demanded in Wolf Hall came across thrillingly. Even the most casual fan of history knows Henry dumped one wife after another in search of an heir and blithely risked war and a schism with Rome by creating his own church just so he could get a divorce. Cromwell made it happen despite the overwhelming odds against it. Even the king of England is not so free and omnipotent as he'd like to believe but it happened and Henry was wedded to Anne Boleyn.

Now -- brazenly -- he wants to do it again. Anne has produced no male heir but many enemies with her sharp tongue and undiplomatic ways. Henry's eye is caught by the demure Jane Seymour and her family wisely keeps her within sight but out of reach of the monarch. Can't a king have what he wants? Henry wants Jane. Cromwell moved heaven and earth and prevented a military catastrophe in holding England together and placing Anne on the throne. Can he do it again? And if he's successful will Henry hate him for it, deciding that Cromwell was the mover and shaker that "pushed" him towards Anne in the first place?

The entire novel takes place over nine months but it lasers in on the few sharp, dangerous weeks when Cromwell must act. The pure pleasure Mantel provides is the joy of being inside the mind of the smartest person in the room. Cromwell is prone to flattery and revenge as much as anyone. But seeing him spar with courtiers, parry with diplomats, bow to royalty without ever debasing himself and always, always striving to both give the king what he wants and anticipate how quickly such desire can change is genuinely exciting.

Cromwell is above all a practical man, something the nobility despise in him but a character trait that the common born Cromwell learns to prize above all else. Watching him out-think, out-maneuver and out-wit them all is deeply satisfying. After pulling off this literary feat twice, you realize the smartest person in the room isn't Cromwell after all -- it's Mantel. 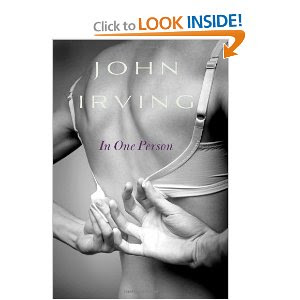 Author John Irving (profiled here by Time magazine) knows this intellectually and having a bisexual at the center of his latest novel is not a big deal. As he points out, Irving has always embraced sexual suspects, as he calls them. The wikipedia entry for Irving even amusingly details recurring topics in his books (like Vienna and bears, for example) and you can see sex and violence in all their permutations appear again and again: homosexuality, lesbianism, incest, pedophilia, sex workers, transexuals, adultery, swinging (as they called it in the Seventies), rape, gang rape, self-mutilation, May-December romance and on and on.

But emotionally, as a writer, I don't think Irving quite "gets" bisexuality, despite his public avowal of schoolboy crushes on other guys. I think that explains the emotional flatness and odd repetitiveness of this book.

The story is eccentric and filled with memorable characters, like all of Irving's books. Billy is our bisexual hero, which can't have been easy at an all boy's boarding school in the early 1960s. Still, for all the insistence of how hard this was, Billy sure had about as welcoming and accepting an environment as one could hope for outside of a gay commune. His step-father is very open to sexual variety (something Billy appreciates once he gets over an awkward crush on the man), his grandfather is so good at playing female roles in the local community theater that it's clear to everyone grandpa ain't just acting and the local librarian is a woman of deep understanding and empathy who always provides the perfect book at the perfect time for Billy's education. He also enjoys a transgender role model (which will become a life-long attraction for him) and ultimately even more positive gay role models.

Billy can "pass" so he doesn't even endure taunting from fellow students except for one guy on the wrestling team that is merciless. But then everyone wants to sleep with that guy anyway and he's soooo merciless that it doesn't take much thought to realize there's more going on here than bullying.

The novel stretches from childhood to the age of AIDS  but it returns again and again to the small town where Billy was formed emotionally. The plot twists are hard to swallow. Billy and another student both suffer from severe speech defects that banally signal their aversion to this or that sexual possibility. Difficulty in saying "vagina?" Check. That other boy -- Tom -- becomes Billy's first boyfriend and they cap off graduation by touring Europe. But Tom is a hopelessly jealous lover so averse to the idea of women and that dreaded vagina that he literally throws up again and again at the possibility. Once he throws up simply because Billy is reading Madame Bovary to him.

Time and again Irving seems to be worried that we'll forget Billy is bisexual or exactly what bisexual means. If Billy isn't interested in a girl, we're told not to worry, he likes breasts. It's just her breasts that don't interest him. This would be fine once but Irving seems pushed to explain Billy's proclivities again and again as if we might be confused. It doesn't help that Billy feels cursed never to be satisfied with just a man or a woman (or just guys or girls), playing into the old stereotype that a bisexual could never be faithful or satisfied with just one person. Now any particular individual can be incapable of monogamy, of course, be they straight or gay or bisexual. But it seems more general here, hence Billy's fascination with those who are transgendered and/or transitioning, as if only thus could he find "in one person" everything he needs.

This book has the odd tone of a memoir in which the writer can't distinguish between what is important and what's not. Stories are repeated again and again; at one point, Irving even acknowledges it, though the slightly new detail added to that anecdote hardly made it worth rehashing. A deflating finale in which Irving panders to the current vogue for not putting labels on people (as if gay, straight and bisexual weren't quite handy descriptions for the vast majority of people) doesn't help matters. As always, he writes with empathy and can spin a tale. But here his imagination is lacking and the erotic quotient is quite low. Billy agonizes a lot over who he is but rarely if ever do we sense the pleasure of desire.

Note: Michael Giltz is provided with free galleys and/or final copies of books to consider for review.

Posted by Michael Giltz at 1:00 PM