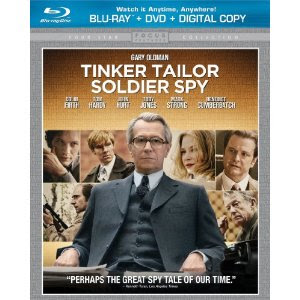 TINKER TAILOR SOLDIER SPY ($34.99 BluRay combo; Universal) -- it's not as if this sober, subtle spy film was ignored -- it was one of the most acclaimed films of the year and received three Oscar nominations. But I think the stock of this remarkable achievement is going to rise steadily. Frankly, I would have thought condensing the convoluted, indirect, intellectual novel by John Le Carre into a feature film was impossible.  (The British did it with a terrific miniseries starring Alex Guinness, but that was a seven part miniseries.) Instead, the compact film meant that audiences could concentrate intently on the tale of intrigue and betrayal unfolding before our eyes, including a career peak for actor Gary Oldman as George Smiley, a role I thought belonged forever to Guinness. Every element is superb and above all it's a sensational second feature from director Tomas Alfredson (Let The Right One In). He's a major talent we'll be watching for years to come. 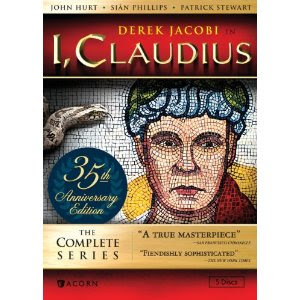 I. CLAUDIUS ($59.99; Acorn) -- From a new classic to an all-time great. This BBC miniseries based on the novel by Robert Graves is often cited as one of the greatest TV shows of all time. I've said so myself. But how does it hold up? It's been 20 or 30 years since I've watched it and I worried it might seem a bit stagey or tame given what's followed. This is The Sopranos in Rome and maybe all the shows that have come since will make it look stodgy. Ha! First, this newly remastered set looks simply terrific. And the story of betrayal and lust and madness in ancient Rome (with good old stuttering-but-clever Claudius staying quietly in the background and outliving them all) is as soapy and compelling and fun as ever. What a cast! Sian Phillips is stunning as the power-mad Livia, who'd poison her own husband or son to get what she wants. But she's just one of many, including Brian Blessed, Patrick Stewart and of course Derek Jacobi in the title role. Thirty-five years on and it's as compelling as ever. Indeed, one of the all-time greats. 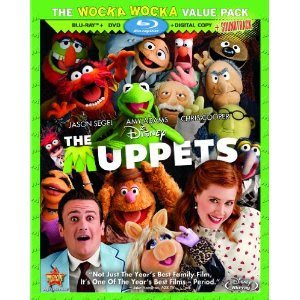 THE MUPPETS ($49.99 BluRay combo; Disney) -- One of the year's most delightful surprises, Jason Segal co-wrote and stars in a sweet, successful update of the Muppets that features good songs, all your favorite characters, celebrity cameos and just the right mix of knowingness and simplicity (the Muppets are never arch or ironic, thank goodness). Yet again, the Muppets need to defeat a bad guy and put on a show to save their run-down amusement park/theater. It's easily the best Muppet movie since the original. Here's hoping they maintain the high standards in the movies to come. And yes, get the Muppets to host the Oscars! 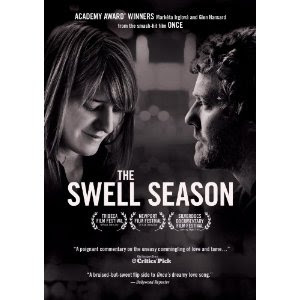 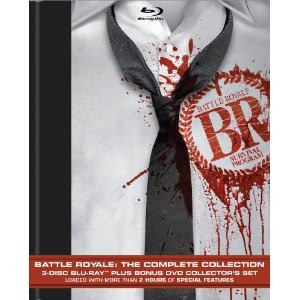 THE SWELL SEASON ($29.95; Docurama)
BATTLE ROYALE: THE COMPLETE COLLECTION ($49.99 BluRay; Anchor Bay) -- Here are two releases for people needing a new fix on their favorite loves. Fans of The Swell Season and the Broadway show Once can turn to this documentary for a look at the couple at their center. Following them for three years, it watches as their romance fades but they find a way to continue to collaborate fruitfully. Sad but sweet. And if you have already seen The Hunger Games three times and read the books over and over again, why not dive into the Japanese version that got there first? Battle Royale was a novel about a class of students plucked out of their lives and placed on an island to battle to the death. It was always compared to Lord Of the Flies until The Hunger Games books came out. You can read the book and then watch the two films in this deluxe set, which includes the fun original, a director's cut, a lesser sequel and a disc of extras. It is even more hyper-violent than The Hunger Games, so parents take note. 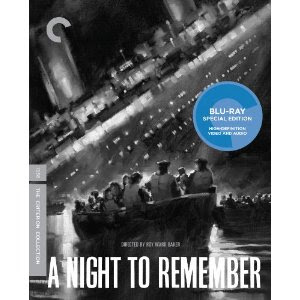 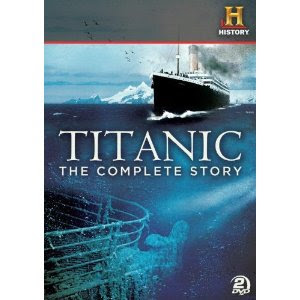 A NIGHT TO REMEMBER ($39.95 BluRay; Criterion)
TITANIC: THE COMPLETE STORY ($19.95; History/New Video) -- With the 100th anniversary, we're being crushed with Titanic-related programming from a new miniseries to a 3-D reissue of the James Cameron blockbuster, books, articles and on and on and on. But if you take the time to watch only one new release, make sure it's A Night to Remember, the sober, quietly moving British film from 1958 that was scripted by the spy novelist Eric Ambler and is noted for its then-up-to-date historical accuracy, ability to keep the human drama in the forefront and a reserve that makes the tragedy all the more moving. Not surprisingly, Criterion provides loads of great extras, including audio commentary, a 60 minute making-of film, a 50 minute BBC documentary about the disaster, a Swedish show interviewing survivors and archival footage of another survivor, Eva Hart. If you haven't completely gorged, the History Channel's collection of three documentaries is more than 5 hours in all. 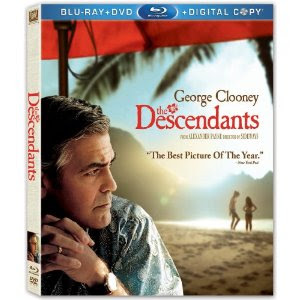 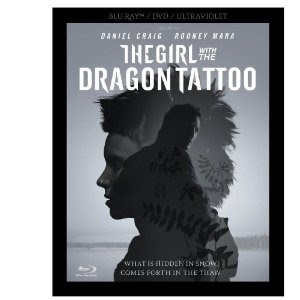 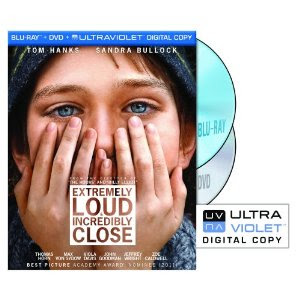 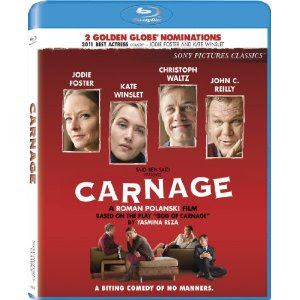 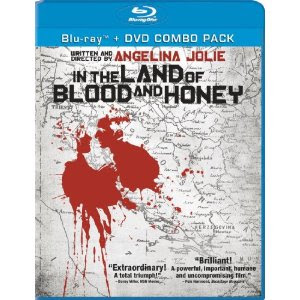 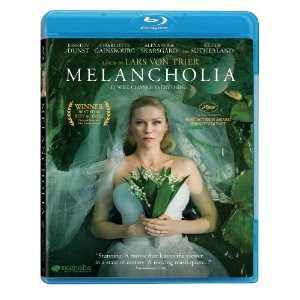 THE DESCENDANTS ($39.99 BluRay combo; Fox)
THE GIRL WITH THE DRAGON TATTOO ($49.99 BluRay combo; Sony)
EXTREMELY LOUD & INCREDIBLY CLOSE ($35.99 BluRay combo; Warner Bros.)
CARNAGE ($35.99 BluRay combo; Sony)
IN THE LAND OF BLOOD AND HONEY ($40.99 BluRay combo; Sony)
MELANCHOLIA ($29.98 BluRay; Magnolia) -- Ah, the best laid plans.... Here are six films made with passion and care and the highest expectations. They all fall short, which makes it all the more remarkable when movies do work. These certainly had everything going for them. Most would call The Descendants a major success and rightly so. It enjoyed critical acclaim and serious box office all over the world. I think it's a step back from the brink for director Alexander Payne and certainly George Clooney is as good as ever while Shailene Woodley is one to watch. But for me, the drama was essentially inert -- I never felt terribly involved and kept wondering about the central dilemma: wouldn't the government of Hawaii want to buy the land for a state park, keeping everyone happy? You'd be hard pressed to find anyone who thought this Dragon was better than the foreign language original. Plus, the books becomes increasingly un-cinematic (the foreign trilogy dropped hard in the grosses for movies two and three) so I'd think long and hard before making the sequel. You know a film is in trouble when it's scared of its central storyline -- Extremely Loud was always desperate to insist it's NOT about 9/11, but
"about every day after." Except, of course, it is about 9/11, just not very interestingly. Carnage should have been a slam-dunk but the thin but well-constructed play by Yasmina Reza loses what power it has when you're not literally trapped in a room (or theater) with these characters. A fine cast brings some fun to the proceedings but it's not enough. Angelina Jolie has every right to be proud of her film debut. But it takes a lot of work to grow as a director and not everyone can be Charles Laughton or Orson Welles right out of the box. Next time, she should take on someone's else's script. She's smart enough to make a good director but you know what it takes to get to Carnegie Hall. Finally, Melancholia is a fairly dull end of the world saga set in a stately home (not exactly the sort of folk designed to elicit sympathy as the world comes crashing down). But what  a sensational opening scene -- it's worth owning just to show off your home theater system. 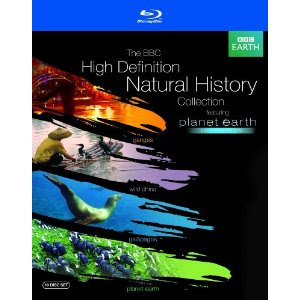 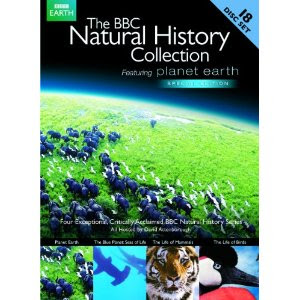 THE BBC NATURAL HISTORY COLLECTION ON BLURAY ($134.99 BluRay; BBC/2Entertain)
THE BBC NATURAL HISTORY COLLECTION ON DVD ($179.98 DVD; BBC/2Entertain) -- The BBC has so thoroughly raised the standards of natural history programming that it makes Wild Kingdom from my youth look like kiddie stuff. You really should be watching Frozen Planet Sunday nights on Discovery. And either one of these sets will give you a wealth of amazing television. They both rather confusingly have the same name but contain mostly different specials. The BluRay set is of course demo-ready and it contains the terrific show Planet Earth, along with Wild China, Ganges and Galapagos. All look sensational though Planet Earth is head and shoulders above as programming. The DVD set (which contains 18 discs) is the artistic high point. It features Planet Earth and the landmark Blue Planet, as well as David Attenborough's The Life of Mammals and The Life Of Birds. It's absorbing television of the highest order. You can bet that Blue Planet and Planet Earth will be packaged with Frozen Planet someday soon on BluRay and, if you're like me, you already own at least one of them. But as a starter set, either one is going to blow you away.

MOST TITLES LISTED HERE WILL BE AVAILABLE IN MULTIPLE FORMATS AND IN MULTIPLE COMBINATIONS, INCLUDING DVD, BLURAY, DIGITAL DOWNLOAD, VOD, STREAMING AND THE LIKE. THE FORMAT LISTED IS THE FORMAT PROVIDED FOR REVIEW, NOT ALL THE FORMATS AVAILABLE. IT IS OFTEN THE MOST EXPENSIVE VERSION WITH THE MOST EXTRAS. DO CHECK INDIVIDUAL TITLES FOR AVAILABILITY IN ALL THEIR VARIOUS GUISES AND PRICE POINTS.

Thanks for reading. Michael Giltz is the cohost of Showbiz Sandbox, a weekly pop culture podcast that reveals the industry take on entertainment news of the day and features top journalists and opinion makers as guests. It's available for free on iTunes. Visit Michael Giltz at his website and his daily blog. Download his podcast of celebrity interviews and his radio show, also called Popsurfing and also available  for free on iTunes. Link to him on Netflix and  gain access to thousands of ratings and reviews.

Note: Michael Giltz is provided with free copies of DVDs and BluRays with the understanding that he would be considering them for review. Generally, he does not guarantee to review and he receives far more titles than he can cover.

Posted by Michael Giltz at 9:34 PM