THEATER: "SANCHO: AN ACT OF REMEMBRANCE"

SANCHO: AN ACT OF REMEMBRANCE ** 1/2 out of ****
THE CLASSICAL THEATRE OF HARLEM

On the silly and enjoyable NBC show Timeless, actor Paterson Joseph plays the owner of a company that built a time machine. But before that show debuted in 2016, Joseph had already constructed his own way of traveling through history: a one-man show about "the extraordinary Negro" Ignatius Sancho, the first Briton of African descent to cast a vote. Joseph has performed the piece all over the world (including BAM in December of 2015) and brings it back to New York for another run at the newly refurbished National Black Theatre on Fifth Avenue, home of the Classical Theatre Of Harlem.

Aptly subtitled "An Act Of Remembrance," Joseph's play about a little-known historical figure is typical of the genre -- it is gently informative, genially entertaining and offers only a modest dollop of drama. Happily, it has two key elements that allow Sancho to be worthy of your time rather than just worthy. Ignatius Sancho is a fascinating, quirky hero and Joseph is an exceptional actor who brings this man to life with the command and ease of a charismatic performer who has been showcased in London by the RSC, the National and was once the favorite to become the next Doctor. (Doctor who? If you have to ask....)

Joseph yearned to explore British history and find himself in it. Yet the very aspect of Sancho's life that made him intriguing to Joseph is perhaps what keeps the play earthbound. This life does not lack for excitement of a sort, but the journey from a child of enslaved people to a man of letters and ultimately a greengrocer who dies of gout is more curious than compelling. 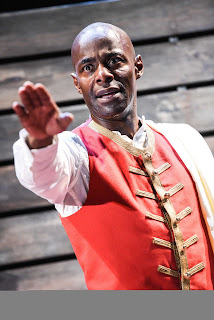 Thanks to Joseph's skill, the 80 minute work flits by with ease. We see Sancho born on a ship during the horrific era of the Middle Passage, bought as a pet for a household run by three stern women, escape into a world of letters and music, become the most prominent black Briton to speak out on the evils of slavery, befriend everyone from actor David Garrick to novelist Laurence Sterne and ultimately turn into a man of property who has earned the legal right to vote. (Even white men without property could not vote at the time.)

This mounting includes co-direction by Simon Godwin, minimal but effective sets by Michael Vale, unfussy costumes by Linda Haysman and a subtle sound design by Ben Park that adds atmosphere at key moments without calling attention to itself. It is no discredit to their efforts that Joseph is what one remembers.

A one-person show can become exhausting but, as writer, Joseph has wisely employed the usual devices to break up the evening. He begins by addressing the audience, sharing why he wrote this piece,  casually tucking his pants into leggings -- thus transforming before our eyes into a man from the 18th century -- and then explaining his choice of a modest lisp to portray his main character.

Joseph also smartly incorporates the work of others for flavor, such as the famous letters on slavery exchanged between Sancho and Sterne, a passage from that writer's hilarious masterpiece Tristram Shandy (a novel so meta and modern I wouldn't be the least surprised if Sterne was actually from the future himself) and an engaging chunk of Don Quixote. At one point Joseph even brings a woman out of the audience to dance with him, addressing her throughout the rest of the show to keep us alive to the moment.

If Sancho does not transcend its genre as a piece of writing the way Sancho transcended his time, one is happy to see it delivered by Joseph. The lisp, the mildly foppish manner reveal a man of social standing. But Joseph also shows the small boy abandoned by the world, the young man thirsting for knowledge and the adult who tempers his righteous anger with a keen intellect. Tilting his head, Joseph becomes the love of Sancho's life; dripping with disdain, he is the public official all too eager to deny Joseph his dignity and rights at the climactic election. If the handsome Joseph never quite suggests the jelly-like physique of the real Sancho, well, it would take a lot more padding than this production could afford.

Like me, you will be drawn to the historical exhibit in the lobby (and accessible to the public.) You will search out some of the letters and music penned by this richly talented artist, a clip of which I've embedded here.  And sadly, you will find parallels in today's world, where the poor, the elderly, women, college students and people of color face roadblocks to exercising their right to vote by a demand for this or that piece of paper which white adult men of means need not provide or can easily afford.

A typo in the program states the action of the play takes place from 1968 to 1980. They meant 1768 to 1780, but for a moment, I was brought up short. Surely black people had the vote in the UK before 1968? I knew this was true. But since black people were effectively denied the vote until right about that time in the former slave states of the US, it didn't seem so absurd and, briefly, I wondered. How sad. How telling. And thus how essential to share Sancho's story again and again until it is a permanent part of history rather than also a pointed commentary on today.


Thanks for reading. Michael Giltz is the creator of BookFilter, a book lover’s best friend. Trying to decide what to read next?Head to BookFilter! Need a smart and easy gift? Head to BookFilter? Wondering what new titles came out this week in your favorite categories, like cookbooks and mystery and more? Head to BookFilter! It’s a website that lets you browse for books online the way you do in a physical bookstore, provides comprehensive info on new releases every week in every category and offers passionate personal recommendations every step of the way. It’s like a fall book preview or holiday gift guide — but every week in every category. He’s also the cohost of Showbiz Sandbox, a weekly pop culture podcast that reveals the industry take on entertainment news of the day and features top journalists and opinion makers as guests. It’s available for free on iTunes. Visit Michael Giltz at his website. Download his podcast of celebrity interviews and his radio show, also called Popsurfing and also available for free on iTunes.
Note: Michael Giltz is provided with free tickets to shows with the understanding that he will be writing a review. All productions are in New York City unless otherwise indicated.
Posted by Michael Giltz at 12:08 PM

Great to see you posting theater reviews frequently again, Michael! My wife & I followed your recommendations on Huff Post religiously and loved all of them. Look forward to more here.

You just made my day! Hope to have a more high profile platform again soon but thanks for following me here. Now tell me which show I was completely wrong about -- always good to know when people of taste disagree. Big week next week w David Ives play "The Metromaniacs," Matthew Broderick in "The Seafarer," the Stoppard revival "Travesties," a "Henry V" at the Public and to top it off "My Fair Lady!"

I can't think of that many that we didn't love. In fact, I can only think of one we didn't like in the past couple of years - The Glass Menagerie. I don't remember all the reasons why we didn't like it - but I remember we chalked it up as an exception rather than the rule :-)

Looking forward to your review this week!

Ah, well the vast majority of critics and fans agreed with you! I was fairly alone on that one. So in general, we have good taste! :) And if you like reading about theater, I do a regular roundup for Broadway Direct which has a nifty email newsletter.