Shakespeare doesn't need any help. Knowing this, the Public Theater has a Mobile Unit, a touring production company that brings theater to the people that can't always come to it: elderly facilities, homeless shelters, schools, prisons and the like. They bring a square carpet, a few modest props and a devoted cast. As everyone from Cheek By Jowl to Joseph Papp have repeatedly demonstrated, theater-goers will eagerly bring the imagination. Instead of being a bare-bones hint at what theater can do, these spare productions can and should be theater at its inventive best.

But Shakespeare does need you to support the play. That rarely happens here. Henry V like most (all?) of Shakespeare is filled with enough wit, pathos, insight and contradictions to allow endless interpretations. But once an interpretation is chosen, every element, every performance should support that idea. You'd be hard-pressed here to know what they had in mind. And if it was to present the story as simply and powerfully as possible, they failed.

Henry V is of course the feckless Prince Hal of Henry IV, now ready to prove his lion-like nature and fitness to rule. His advisers urge war on France and an insult by the Dauphin (tennis balls! the nerve!) is enough to rouse his warrior's blood. Henry sets off to war, uncovers an assassination plot, wins his first major victory, faces daunting odds at Agincourt but proves victorious again and soon wins all of France and the hand of Princess Katherine in the bargain. While you can turn the play on its head and reveal a deep distrust of our eagerness to justify war, it's just as often used to boost morale. Here, I fear, they do neither. Newcomers will get the gist but be bored; veteran theater-goers will shrug. 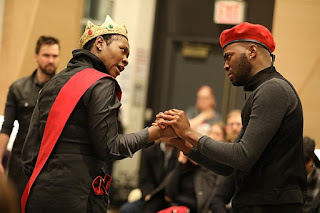 The general in charge here is the director Robert O'Hara, who has done innovative, stellar work on shows like The Brother/Sister Plays (Part 2) and his own uproarious BootyCandy. But this time his flashy maneuvers serve no purpose, like marching soldiers here and there without any regard for the enemy of audience indifference. For example, I suppose the cast littering the stage at the beginning and end suggests the price of war, but the idea  falls flat.

The moment of peak clarity for me came at a moment of peak directorial confusion, when Harry goes among the troops before the battle of Agincourt. Various cast-members repeat lines of text in creepy chorus, moving this way and that, leaning on each other and intoning their words to very odd effect. All the moment need do is set the scene: it's night and the French and English are camped so close to each other that the fires of one army can light the faces of the other. They are tense and nervous before the big battle to come, though presumably the English are more nervous since they are so frightfully outnumbered. That's it. It's a simple description but O'Hara stages the moment in such a weird, unnecessary manner that it takes even those familiar with the show a moment to get their bearings.

More defensible is the flurry of outrageous accents, from the Monty Python-esque banter of the French to the Caribbean accents when Harry argues with a common soldier who has no idea he's trading insults with the king. (Never has "me thinks" sounded so natural and I wouldn't have minded if "I" had become "I and I".) Still, the accents are so broad it becomes difficult to understand what they're saying. The haughty demeanor of Patrice Johnson's Montjoy told us all we needed to know; did we need an accent so impenetrable it was hard to grasp his actual dialogue? Ditto every scene with the French King (Joe Tapper) and the Dauphin (the appealing Michael Bradley Cohen, often seen in dramas and so eager to goof off here one feels like telling him "get thee to a comedy").

But it's not just the French. Zenzi Williams as Henry has so many scenes that she has the chance to land a few of them. But her two big battle speeches range from loud to louder and too often her dialogue is delivered as poetry instead of prose, losing their meaning altogether. Happy exceptions in the show include a rock solid David Ryan Smith as Exeter, et al and Ariel Shafir as Constable, et al. Surely it's telling that the best scene in the play took place between Katharine and Alice (Kim Wong). The darn thing is in French! But while Carolyn Kettig as the princess takes her cue from O'Hara and goes broad, it is simply and clearly staged and the audience immediately knows precisely what is going on.

That leads to one other moment that's quite effective. At the finale, Henry woos Katharine, a scene often presented as a romantic dessert after the rest of the play. Here however, the warlike Henry tires of Katharine's coy refusals to be wooed and nearly chokes her while demanding -- quite sweetly -- that she kiss him. It's unnerving...and would have been even better if the rest of the play had allowed us to see that brutal side of Harry present or growing all along. Instead, it's out of left field and soon passes. Still, for a moment we think, "Oh! That was interesting." A pity the rest of this production didn't build on that idea or simply get out of the way of the story.


Thanks for reading. Michael Giltz is the creator of BookFilter, a book lover’s best friend. Trying to decide what to read next?Head to BookFilter! Need a smart and easy gift? Head to BookFilter? Wondering what new titles came out this week in your favorite categories, like cookbooks and mystery and more? Head to BookFilter! It’s a website that lets you browse for books online the way you do in a physical bookstore, provides comprehensive info on new releases every week in every category and offers passionate personal recommendations every step of the way. It’s like a fall book preview or holiday gift guide — but every week in every category. He’s also the cohost of Showbiz Sandbox, a weekly pop culture podcast that reveals the industry take on entertainment news of the day and features top journalists and opinion makers as guests. It’s available for free on iTunes. Visit Michael Giltz at his website. Download his podcast of celebrity interviews and his radio show, also called Popsurfing and also available for free on iTunes.
Note: Michael Giltz is provided with free tickets to shows with the understanding that he will be writing a review. All productions are in New York City unless otherwise indicated.
Posted by Michael Giltz at 12:47 AM