The scenic design was one-note (if striking), the costumes were tragically wrong, the play was repetitive and odd and I couldn't make heads or tails out of the performance by the supremely talented actor Condola Rashad, who I would gladly follow into battle on any stage anywhere. Yet amidst all this wreckage somehow three or four performances remained compelling, Shaw's probing of the clash between earthly powerful and heavenly might was intriguing and it was all..interesting. Fatal words commercially, perhaps. But the Maid deserves honesty.

The story of Joan of Arc will be forever compelling, it seems. A young maiden -- inspired by the voices of heaven -- storms her way to the head of the French army, drives out the British, crowns the king...and is then handed off to the Church so she can be burned as a heretic. Truly, no one is more suspicious of miracles and heavenly intervention than the Church -- that's their job, after all. But Joan's story has proven multi-faceted with each generation of artists discovering a new angle to explore: war and peace, priests and peasants, nationalism and a higher calling, gender (of course), sexuality and so much more.

It all boils down to one essential question: is Joan visited by the voices of heaven, suffering some malady that might suggest such a thing to her, genuinely mad or just mad for power and glory and ready to use any story she can to achieve it? I'm not quite sure where playwright George Bernard Show or Saint Joan land on this question; this is my first time seeing it and I imagine one could approach it with any number of answers to that puzzle. (Indeed, Shaw made clear that to him it was a piece with no villains; everyone behaved in relative good faith.) With no real tension over the direction of the story -- we all know the witch will burn -- the drama over what to think of Joan is all we have. Here, I think, the drama is lacking.

Certainly Condola Rashad is a forceful Joan. She is alight with fervor and determination and soon talks her way into an audience with a man in power who can give her passage to the royal court. And that will lead to Joan breaking the siege of the British, crowning the King and then determines to free Paris. Everyone else has had enough of war and Paris might be too big a prize. They make clear if Joan is captured, no one will ransom her and that is precisely what happens.

It's fun to see Joan finagle her way to where she needs to be. Again and again, Rashad presents Joan as responding simply and clearly to any who question her faith. She's clever, certainly, but not "clever clever." You never get the sense the Maid is calculating. Those around her may suggest this or that complication but a belief in the voices and a trust in their judgment is all she needs. On the other hand, she's never naive or simple-minded, never seen glowing and head tilted towards heaven in rapture. This Joan is more likely to be keeping her eyes on the ground to maintain footing in the mud and blood of battle. It's all quite straightforward: Joan hears voices, she does as she's told and this leads to victory, usually. If she falters when brought face to face with burning at the stake, well who can blame her? 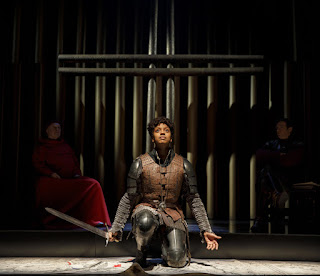 With little drama in how to see Joan or her ultimate fate, all we have is this particular production, overseen by director Daniel Sullivan. It's certainly thorough, though I can't help wondering why we have a 20 minute discussion among the Church leaders gathered to try her...which leads into a questioning of Joan that covers the same territory. Clearly, Saint Joan might be trimmed in interesting ways to focus on earthly maneuvering for power or questions of religion. Here we get it all and it's exhausting.

The scenic design by Scott Pask is certainly striking -- it looks as if the entire play is taking place inside a gigantic pipe organ, with golden tubes arrayed across the back and sides of the stage. Along with a few modest props, like chairs or a bed, that's about it. At first visually arresting, it becomes perhaps monotonous. Far worse are the costumes by the Tony winner Jane Greenwood. Someone with as long and distinguished a career as hers must sometimes come a cropper and that she does here. For all I know the costumes are precisely accurate but who cares? They immediately appear like leftovers from a Monty Python sketch and the sense that everyone is wearing a costume never ends for a moment. The entire evening would be immediately (if not dramatically) improved if everyone simply wore anonymous black.

Despite all of this, certain actors made an impression. Rashad's choices didn't add up for me, especially in the crucial scene where Joan recants her claims of spiritual guidance when the prospect of burning at the stake becomes all too real. Is she simply prone to human weakness or suffering a crisis of faith or admitting it's all been a sham? I'm not sure what Rashad had in mind but she's too intelligent and winning an actor to lose me entirely. Whenever she's not on stage, we're waiting for her return.

Patrick Page's voice makes one immediately sit up but it's no surprise that the actor with the juiciest role -- the Inquisitor -- gets to have the most fun. John Glover has the stuffier role of the Archbishop of Rheims, though he manages to suggest a cagy willingness to let the political winds blow and bide his time without overdoing it. Adam Chanler-Berat (of Peter and the Starcatcher) can'[t help but be appealing, even playing the much bullied Dauphin. Still, a less scattershot play would have given him more focus. In contrast, Jack Davenport as the enjoyably wily Earl of Warwick and Daniel Sunjata as Joan's fellow soldier Dunois are so solid you realize this enervating production must be draining the life out of a much better play.

Saint Joan certainly works oddly here, with deeply serious theological debates followed by broad comedy followed by an almost meta post script in which Joan and other main characters crawl into bed with the Dauphin-now-King and discuss the late Maid's newly minted status as a Saint. A better take on it would make sense of all this. But a solid cast at least makes clear Joan of Arc is worth puzzling over and this play deserves doing. Again.

Thanks for reading. Michael Giltz is the creator of BookFilter, a book lover’s best friend. Trying to decide what to read next?Head to BookFilter! Need a smart and easy gift? Head to BookFilter? Wondering what new titles came out this week in your favorite categories, like cookbooks and mystery and more? Head to BookFilter! It’s a website that lets you browse for books online the way you do in a physical bookstore, provides comprehensive info on new releases every week in every category and offers passionate personal recommendations every step of the way. It’s like a fall book preview or holiday gift guide — but every week in every category. He’s also the cohost of Showbiz Sandbox, a weekly pop culture podcast that reveals the industry take on entertainment news of the day and features top journalists and opinion makers as guests. It’s available for free on iTunes. Visit Michael Giltz at his website. Download his podcast of celebrity interviews and his radio show, also called Popsurfing and also available for free on iTunes.
Note: Michael Giltz is provided with free tickets to shows with the understanding that he will be writing a review. All productions are in New York City unless otherwise indicated.
Posted by Michael Giltz at 12:35 AM