THEATER: TENNESSEE WILLIAMS ON SIMMER WITH "SUMMER AND SMOKE"

Right after the towering, never-to-be-repeated success of A Streetcar Named Desire in 1947, playwright Tennessee Williams delivered a prequel of sorts with Summer and Smoke. It told the story of how a Blanche DuBois character might come to be.

Alma (Marin Ireland) is the daughter of a preacher who yearns for artistic refinement and a superior existence, not to mention the handsome but callow son of the doctor next door. Their friendship remains just that, from a childhood fancy to adult recriminations, with Alma unable to accept anything other than a "spiritual" bond while John (Nathan Darrow) enjoys more earthly pleasures with every other woman in sight. Needless to say, when Alma approaches spinsterhood and is finally ready to savor the sins of the flesh, John has reformed himself and pairs off with a pretty young thing. Heartbroken and bitter, Alma tosses herself at the first of what is sure to be a string of traveling salesmen. The clanging bell of that streetcar can almost be heard in the distance.

Summer And Smoke shows Williams beginning to reshuffle his obsessions -- damaged women, simmering desire, the stultifying mores of a small town and above all self-deception -- to less and less effect. The melodrama would be produced fitfully over the years, marking a notable artistic triumph for actress Geraldine Page but never really finding an audience. Williams overhauled it completely in 1962, retitling it with the precious name of The Eccentricities Of A Nightingale. No matter.

Classic Stage Company and Transport Group have staged this flawed work with admirable restraint. Anchored by two excellent performances, it avoids the magnolia-scented hysterics Williams can tempt actors with. By underplaying the tragedy, the pain cuts deeper and more realistically. So you can pinpoint both the symmetrical tidiness of the plotting and the more lurid details of the story, all thanks to the lucid direction of Jack Cummings III. They can't make Summer And Smoke a successful drama, but they do make this production an interesting one. 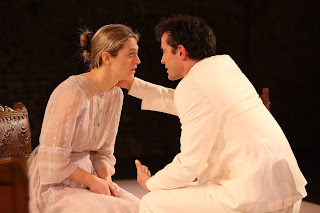 
Classic Stage Company's space always brings out the best in set designers and that's true here for Dane Laffrey, who offers up a clean, well-lighted space with minimal props like a picture of a statue and an anatomy chart to indicate a park or doctor's office. The costumes by Kathryn Howe are also on point, not to mention the lighting (R. Lee Kennedy), sound design (Walter Trarbach, never intrusive) and effective original music by Michael John LaChiusa. It's a top-notch creative team all around.

Which makes it a shame that lesser roles are handled with less aplomb. I blame the script by Williams and director Cummings. Numerous lurid details litter the story and the less they're emphasized the better. Alma has a troubled mother and a dour minister father. But in one scene her mother (Barbara Walsh) seems like a woman-child, perhaps the sufferer of a stroke or special needs. In another, she's a truth-telling harridan, fully in command of her senses. So which is it? Walsh and T. Ryder Smith as the Rev. seem to flounder. The less said about the "exotic" lure of a Mexican temptress and her gangster father the better. But if those scenes couldn't be trimmed or cut somehow (like Williams I was immediately tempted to fix this show), Cummings might have encouraged a lower key from the actors trapped in those roles. Further, an unnecessary opening scene shows Alma and John as children and the show makes the fatal mistake of "playing" them as children, complete with exaggerated vocal performances. It's a misstep that takes a good scene or two for the production to recover from.

In contrast, Hannah Elless as Nellie and Tina Johnson (very amusing as a blunt townswoman) are both strong and Jonathan Spivey and Ryan Spahn are good in modest parts. Spivey underplays the sad sack nature of his also-ran love interest and Spahn underplays the potentially lecherous role of the salesman which is all to the best.

Still, that's a lot of problematic characters and performances that Cummings should have and could have focused better. The marvel is how -- despite all this and the essential flaws of the play -- that the two leads prove to be memorable. John Buchanan convinces as a scoundrel and ne'er do well, without ever exaggerating his prodigal son nature. He's lost but not forever, a bad boy but not really bad, not really. Yes, Alma wants to redeem him and he wants to wake her up, but you aren't forced into Greek tragedy by seeing them spar. Buchanan's charisma grounds the show as much as the heroine.

Somehow I've missed the acclaimed Ireland in all but a few stage productions. She's marvelous here. You can't tackle a Williams heroine without some eccentricity, but Ireland never tilts into the grotesque. You're always on the side of Alma -- even if she frustrates, you don't sit there thinking what on God's green earth could this man see in her? I'd hate to see Summer And Smoke with two lesser actors in these parts. And I'd hate not to see Ireland in whatever she does next. Her Alma is sinking slowly at the end. The salesman agrees to a trip to the local casino (a den of inequity if ever there was one) and Ireland flings up her arm in a game attempt at high spirits. Yes, it will become sad and sordid all too soon for Alma. But Ireland lets you feel the deluded romantic in her is still alive, still open to the possibility of magic, even in a hotel room, even if for just one night. And for a moment, Summer And Smoke conjures a little magic too.