SHAKE AND BAKE: LOVE'S LABOUR'S LOST *** (but knock off half a star if you skip the alcohol)
SHAKE AND BAKE THEATER

What hath Tolstoy wrought? Ever since a musical version of War and Peace tossed some so-so appetizers and a shot of vodka at theater-goers and called it a meal, it seems like any offbeat show trying to stand out thinks, "What about food?" And while the food at the immersive Natasha, Pierre and the Great Comet of 1812 was the least of it, certainly the alcohol can't hear. Most any show is improved by a drink during the interval. (Though who can afford the typical prices of a Broadway bar?) Still, while the idea of dinner theater done with panache isn't precisely a bad one, it's not terribly good either when the food feels like subpar catering.

Happily, that is not the case with the meat-packing district presentation of Shakespeare's Love's Labour's Lost. The title Shake and Bake is amusing, the food was more substantial than one usually gets (akin to a full meal rather than the hyped-up canapé or two usually proferred) and the choice of play was wryly amusing.

Shakespeare's early comedy involves a king and his friends pledging to AVOID good food and drink and merrymaking in general so they can devote three years to sober study. Good for them! They will eat just one meal a day. They'll even fast one day a week. They'll sleep only three hours a night. And they won't even lay eyes on a woman, much less woo them. Good luck with that. Their pledge lasts about as long as it takes for the Princess of France and her attendants to come to court

So a play that abhors food is presented while the audience indulges in nonstop food and drink. And a play that -- oddly for a Shakespeare romance -- has a slot for music only at the very end, here features music and dance from beginning to end. Shakespeare would approve, or at least the Groundlings would. 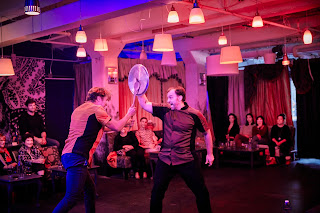 If you're a wine snob, you might want to splurge on the top ticket since that gets you an upgrade on the wines served (a glass of white and red). However, I must say that even the standard wine was palatable, which is saying something since I have no nose for rosé and the like but -- if this makes any sense -- it means I'm even less accepting of a so-so wine than someone who knows what they're tasing. The shot of Jägermeister of course can hardly go wrong. The play began with pickled seasonal vegetables -- in our case, carrots and green beans. I quite liked the tart flavor of the carrots, while the green beans were snappy too. In every case, I'd suggest diving in and consuming away; the sooner you're done, the sooner you can give your full attention to the action. (Unless of course, an actor is right next to you. I held off on chomping away while the clown cavorted on my couch or an actor soliloquied nearby. I mean, just because food is on tap is no reason to be a barbarian.

One more reason to eat away? The food keeps coming. A modest taste of salmon and cream cheese on a cracker, a fine side salad of mixed greens (of course), a Cheeto-dusted mac n cheese that was the only tricky item to consume (and really, being a mac n cheese fiend the only one I really felt was too small), a brisket taco served during the interval, a pink lemonade soda palate cleanser, a roasted beet gazpacho that should also be just a smidge bigger in portion and a dessert left for us to serve ourselves as the cast slipped away -- namely a buttermilk panna cotta that was a highlight to this sweet toothed critic.

I wouldn't want to oversell the food. But heck, I just saw Oklahoma at St. Ann's Warehouse and the down-home vibe of a barn social was sealed by the fact that they prepared chili and cornbread and then served it to the audience during the interval. Well, I love actress Mary Testa and she opened up a box of Jiffy corn muffin mix with zest and dumped it in a bowl, but she did NOT make corn break muffins. And the crock pots lining the set, sitting tantalizingly in front of the audience? Just for show! The muffins and chili were actually prepared elsewhere and offered up in a teeny tiny styrofoam cup with a sliver (yes, a sliver!) of cornbread laid on top that made the tasting menu of Shake and Bake look like a banquet worthy of Henry VIII in comparison.

Yes, many many shows have tossed in food and/or drink but rarely with skill. Executive chef David Goldman and the onstage chef Jeff Ventricelli delivered under the far from ideal surroundings of live theater. 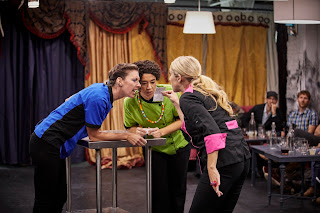 
Hmm, now what am I forgetting? Ah yes, the play. The creative team assuredly did not. They chose wisely and they trimmed off the fat (which includes the longest word in the English language and the longest speech in all of Shakespeare) to deliver the meat of the play in under two hours, including a break. (I was, frankly, astonished when I looked at my watch after it was over.) They also kept the sense of the play, by and large, though the clownish subplot of the romantic feud between the Spanish lord (Charles Osbourne) and Costard (who surely should be spelled Custard here and was played engagingly by Rami Margron) was set up and then mostly dropped. That aside, the wooing and wordplay between the King's men and the Princess's women (none of whom were interested in sticking to their various vows) came across easily.

The adaptation by David Goldman, Victoria Rae Sook (who also gave herself the plumb role of the Princess and had an easy regal air) and Dan Swern (who also directed) inserted all sorts of nonsense, including wall-to-wall music (from an acoustic guitar slow jam on Walk The Moon's "Shut Up and Dance" to recordings of George Michael) and a food-themed dance that included tongs as castanets. With couches and chairs lining the walls, the main stage is an open rectangular space. So Swern's lighting in particular does heavy lifting to create scene-setting and change of moods in concert with modest props and costumes.

This version of Love's Labour's Lost, to be true, offers no great shakes in terms of insight -- just the usual hijinks a Shakespeare comedy can make an excuse for. Yet time and again the momentum is rescued by the flow of alcohol, a tasty bite and most of all a cast that rose above the dashed-off proceedings with a commitment to their parts and that difficult balance of not taking things too seriously but not clowning for its own sake.

Darren Ritchie made a strong king and had the best chemistry of the night w Sook. Mary Glen Fredrick and Alex Spieth made good impressions, even though the play as edited left them far fewer opportunities to shine than the men. Not so Osbourne who was the real clown of the night, popping in from various unexpected angles to assay the silly Spaniard or a very fey courtier for the women (a trope that proved tiresome to me until his good nature won me over). Like the women, Oge Agulué made the most of a small part, bringing charm and wit to his turn as Longaville, the King's man who is wary of the entire "let's have no fun and just study" oath. But Matthew Goodrich was the find for me, goofing and cavorting and yet taking very seriously the romantic stakes. He convinced me this really was a play about his character Berowne. (And he really needs a new headshot since the one in the program doesn't do justice.) An understudy in various Broadway shows, Goodrich will get his shot.

With another shot of Jäger I would have sworn that everyone in the show will do the same! And that Shake and Bake will run for years! They'll get that break and leave the actor's lot of catering and waitering far behind. The amusing (cruel?) irony is that here they have a good showcase and STILL don't leave waitering behind. Here they are delivering their lines while preparing food, serving it out, making a joke to the audience while offering wine, declaring their love to another character and then clearing a course away without breaking stride. The fact that they maintained their dignity and made all this stage business flow easily -- juggling lines and remembering which person at table 7 had the vegan option -- was a credit to the lot of actors everywhere and a show that caters to their many talents.


Thanks for reading. Michael Giltz is the creator of BookFilter, a book lover’s best friend. Trying to decide what to read next?Head to BookFilter! Need a smart and easy gift? Head to BookFilter! Wondering what new titles came out this week in your favorite categories, like cookbooks and mystery and more? Head to BookFilter! It’s a website that lets you browse for books online the way you do in a physical bookstore, provides comprehensive info on new releases every week in every category and offers passionate personal recommendations every step of the way. It’s like a fall book preview or holiday gift guide — but every week in every category. He’s also the cohost of Showbiz Sandbox, a weekly pop culture podcast that reveals the industry take on entertainment news of the day with top journalists and opinion makers as guests. It’s available for free on iTunes. Visit Michael Giltz at his website. Download his podcast of celebrity interviews and his radio show, also called Popsurfing and also available for free on iTunes.
Posted by Michael Giltz at 6:52 PM