MOTHER OF THE MAID * out of ****
THE PUBLIC THEATER


My Aunt Peggy was pretty much a saint. I never saw a halo or found her spotlit by a heavenly glow. But Peggy Ann Walpole devoted her life to helping others. She worked as a nurse in Toronto in the 1950s, but found it just...unacceptable that women were sometimes discharged with nowhere to go. Prostitutes, homeless, out of jail, fleeing an abusive husband -- these women left the hospital to wander the streets. So Peggy simply rented a hotel room and told a woman, "You can stay there for the night." And then she did it again and again until she eventually founded Street Haven, providing shelter for women, services to help them mainstream back into society and so much more. Aunt Peggy received every honor you can think of, from the Order of Canada to the highest honor a layperson can be given in the Catholic Church. She met Popes and Mother Teresa but mostly just helped women...that is, when she wasn't in and out of hospitals her entire life with one debilitating illness after another. I know women prayed for her. And since she died in 2006, it wouldn't really surprise me in the least if women prayed to her.

But a saint? Well, that seems strange to say the least when you actually know someone. Aunt Peggy never mentioned a mission from God or visitations from on high. If she had, I would have probably rolled my eyes. Just as a prophet is never honored in their own hometown, a saint is surely never treated as holy in their own family.

That, perhaps, was the starting point for Emmy winner Jane Anderson's new play Mother of The Maid. It stars Glenn Close as Isabelle Arc, whose child Joan would indeed claim a mission from God to cleanse France of the English rabble. What would it be like to raise a girl who would be raised up by the Church and the French court to lead men into battle, only to be captured and burned at the stake as a heretic? One can imagine all sorts of approaches, with Joan's family offering caustic commentary or perhaps revealing the deep wellspring of faith that Joan drew upon. It might be funny, with these modest people contrasting amusingly with the French courtiers aghast or delighted by their frankness. 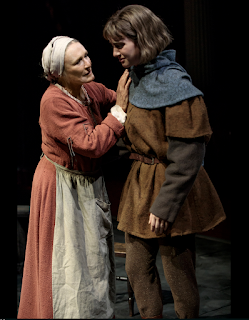 Sadly, while Mother of the Maid hints very modestly at all of these possibilities, it succeeds at none of them or more accurately barely strives for any of them at all. The tomboyish, blunt Joan (Grace Van Patten) is clearly bothered by something and her mother -- no stranger to the facts of life as a farmer's wife -- thinks Joan might be feeling sexual urges. When she sees her daughter in what we know to be religious ecstasy, Isabelle's assumption is far more prosaic.

But no, that's not it at all. Joan reveals the truth -- that she has been visited by Saint Catherine and is called by God to lead the French army into battle and defeat the British. Nonsense! And Joan's father (Dermot Crowley) beats her backside and ties the child up before she can disgrace the family any further with her mad talk. Too late, for Joan has already garnered attention. Before you know it, she and her brother (Andrew Hovelson) are off to court, with Joan's mother not far behind, just for a look around and to make sure her daughter is ok.

It's a curiously flat play. Even at the break, indeed even three-quarters of the way through I was still trying to puzzle out exactly what Anderson had in mind. Scenes with Kate Jennings Grant as a Lady of the Court felt especially beside the point. Those scenes aren't funny or insightful or dramatic or much of anything. They feel like the sort of scenes that may get written but are soon cut out for the simple reason that nothing -- dramatically speaking -- happens in them. And on it goes, from triumphs in battle to capture to Joan's execution. Sometimes we are with Joan and sometimes her family but never are we remotely engaged.

Isabelle's husband accuses her of too much faith. Her daughter Joan accuses her of not enough. It hardly seems to matter. Isabelle appears to have an unquestioning simple faith and if she encourages her daughter to deny the visions that came to Joan, well who can blame her? She just wants her child to live. If it's meant as a moment of crisis, the struggle hardly registers. The entire play we stand on the sidelines of historic events. But our perspective doesn't undercut the grandiosity on display or bring great people down to size or offer insight or insert humor or do anything one might hope for.

Among the tech elements, John Lee Beatty does wonders in the tiny three-sided space of the upstairs theater this piece is staged. With the vivid assist of the lighting by Lap Chi Chu, Beatty offers up multiple convincing scenes from a farmhouse to court to a dungeon. The cast can do little with the material on hand, but star Glenn Close is nonetheless admirable in setting the right tone for everyone. She's too much of a pro to not realize the play isn't working. But Close never rides roughshod over the work; she never tries to underline the humor or pathos on tap. She stays resolutely in key with the story when a lesser talent might have tried desperately to cover up the flaws by going bigger.

At the end, the mother of the Maid describes the heartache of Joan's death and how Isabelle's husband died shortly after. She refused to fade away. Instead, Isaballe got a cart, taught herself to read, traveled widely and then headed to Rome where she stared down the Pope, stood before tribunals and insisted her daughter was no heretic. Ultimately she prevailed. Well, heck, that sounds interesting and one is tempted to say Anderson should have told that story instead. But there's no reason to believe that play would have been any stronger than this one. I fear I lack faith.


Thanks for reading. Michael Giltz is the creator of BookFilter, a book lover’s best friend. Trying to decide what to read next?Head to BookFilter! Need a smart and easy gift? Head to BookFilter! Wondering what new titles came out this week in your favorite categories, like cookbooks and mystery and more? Head to BookFilter! It’s a website that lets you browse for books online the way you do in a physical bookstore, provides comprehensive info on new releases every week in every category and offers passionate personal recommendations every step of the way. It’s like a fall book preview or holiday gift guide — but every week in every category. He’s also the cohost of Showbiz Sandbox, a weekly pop culture podcast that reveals the industry take on entertainment news of the day with top journalists and opinion makers as guests. It’s available for free on iTunes. Visit Michael Giltz at his website. Download his podcast of celebrity interviews and his radio show, also called Popsurfing and also available for free on iTunes.
Posted by Michael Giltz at 10:29 PM