THE RESISTIBLE RISE OF ARTURO UI *** out of ****
CLASSIC STAGE COMPANY

I've never seen this Bertolt Brecht play before and it's easy to see why. I can readily imagine it as an earnest, tiresomely obvious lecture on the rise of Adolf Hitler, a production that would scare one off this play and Brecht in general for years to come. This dire warning was essentially ready to be performed in 1941. But American theater companies weren't ready to stage such a provocative show when the US was still officially neutral in World War II. So it sat in a drawer until after Brecht died. Finally in 1958 it made its debut and has proven catnip ever since for lead actors like Christopher Plummer, Simon Callow, Al Pacino, Antony Sher and many others.

Who can resist the idea of playing a two-bit hood from Brooklyn that muscles into the cauliflower trade in Chicago, viciously betraying any friend and crushing any enemy that gets in his way? Not star Raúl Esparza, in an electrifying, satisfying performance that reminds us how good this actor can be. Arturo Ui is intended to be a flashy, larger than life role and you can't go too big when transforming from a punk into a world class dictator.

And yet Esparza never does go big, except when the finale absolutely demands it. He has an intriguing emotional reserve on stage; you feel Esparza is always holding something back, something that remains his own even when he's in the spotlight demanding your attention. That works a charm here since no one ever really knows Arturo Ui, the soulless, pitiless golem that cannot betray anyone since he never pretended anyone else matters. Arturo demands loyalty but he never, ever offers it. 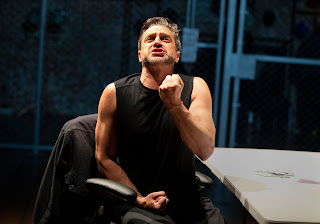 In John Doyle's brisk direction, this brutally funny work embraces the didactic nature of the text with glee. The audience is seated on three sides and the cast is held behind a metal fence, rattling off the introduction that spells out the action soon to take place. They enter the bare stage via a gate that clangs shut like the door of a prison or the perimeter of a concentration camp. In case you miss the point, the real life incidents that served as raw material for Brecht are spelled out year by year, scene by scene, sometimes punctuated with the sound of adoring crowds cheering on the Führer.

Functional folding tables -- the kind you'll find in any community center -- are constantly being set up or taken down. Actors move into position with military briskness, firing off lines like bullets. And then a table is rotated, two chairs appear and another scene begins with a negotiation or a plea or a plan. Back and forth, again and again, with Arturo just an annoying pest on the margins at the start. Then he proves maybe a little useful and is allowed in the door. And then he's speaking up a little more forcefully and then he has a seat at the table and before you know it he's at the head of the table. The front man he used to garner the support of the public is pushed aside and how the hell did that happen anyway? Is this schmuck in charge? Really? 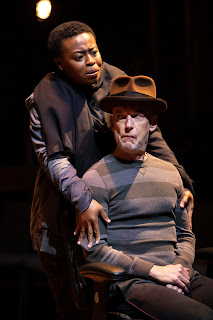 This is agitprop, not realistic drama and it might prove more medicinal than the bracing tonic we want. Happily, it's fun! The cast delivers their lines with rat-a-tat glee, like the announcer in a Movietone News reel. Arturo Ui has come to Chicago! The cauliflower racket is feeling the pressure! The town of Cicero may be next! The terrific George Abud as a head of the syndicate Arturo wants to take over is especially good at offering up his dialogue with verve and a wicked, desperate gleam in his eyes. But it's not all hijinks and end-of-the-world desperation. As the widow of a man who tried to bend to Arturo (but didn't bend readily enough), Omozé Idehenre offers an essential glimpse into the heartrending toll of this tragedy. That makes her eventual acquiescence, her public embrace of this killer and her oh-so-subtly reluctant applause all the more painful. (She's also wonderful as a cynical official overseeing an investigation with diligence but inevitably sidelined by the syndicate.)

Yes, Brecht has changed Hitler's domination of German politics into the deflating "dream" of conquering the vegetable trade. The invasion of Austria becomes the invasion of Cicero. The Reichstag fire is transformed into a warehouse fire used to intimidate anyone foolish enough to stand up to Arturo's reign. It's silly and mocking -- wonderfully so. Brecht doesn't deflate or diminish what Hitler did; he just gives it a smaller scale so you can begin to grasp the horror of it all. The death of eight million is beyond us; the death of eight might be within our ken. 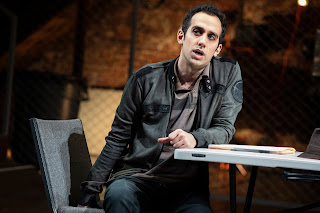 It's a strong cast, with Abud (The Band's Visit) in particular proving yet again why it's always a good sign to see his name in the credits of a show. Others like Eddie Cooper and Christopher Gurr keep the satire stinging but hold onto a core humanity that makes this more than allegory. When hearts aren't breaking, satire can be pretty toothless.

The space of the Classic Stage Company has some magic that brings out the best in scenic designers. Here that holds true, mostly, though a upper level set behind the fence is distracting. Stairs lead up to it and one can't help wondering when this space will be used. When it is finally -- and briefly -- employed, the effect hardly seems worth the bother. Doyle's instinct to pare down failed him here, but it's only a minor distraction. Otherwise, the tech elements are a plus, from the costumes of Ann Hould-Ward (casually revealing character) to the lighting of Jane Cox and Teresa James (never attention-grabbing but always focusing our attention where it needs to be) to the sound design of Matt Stine (flashier than sound design usually proves, but necessarily so in this context).

Doyle uses every inch of the space, fluidly so, and it all climaxes for me at the end of act one. Arturo knows he must speak in public and command more respect, so he turns to a classically trained actor for pointers. She coaches him in how to walk, how to stand, how to sit and above all how to speak. Esperza has some fun holding his hands over his crotch the way she suggests, but for the rest of the play these mannerisms become more and more natural in nicely timed stages. Act one ends with him reciting the famous Marc Antony speech from Julius Caesar as practice and Esparza transforms from a simple man of Brooklyn into a more and more commanding speaker until you're simultaneously magnetized and horrified. At the end of the scene, he's sitting in a chair with casual authority, spotlit and glowering -- not like a two-bit Mussolini, but like Il Duce himself.

That's it, I thought. I think I've just experienced everything this play has to offer. Indeed, act two was in many ways just more of the same: it takes the message of act one and underlines it and then adds a few exclamation points for good measure, nothing more.

But Doyle allows it to slow down and even slip back a bit in pacing, so we see again Arturo overwhelm the opposition, such as it is. Yes, we'd already seen this but it felt fresh or at least like a new stage in his malignant growth. I still believe everything was there in one act; Brecht's work was done. Yet act two had its own pull, with Idenhenre getting her chance to shine emotionally. At the very end, Esparza goes full Adolph during a final ranting speech. While I preferred the silent menace of his glowering visage of the end of act one, it was shiver-inducing.

Recent productions have reportedly underlined comparisons to President Trump and the rise of fascism around the world. I'd call Brecht prescient except one can always safely predict ugliness and hate will appear in hard times and need to be confronted. The play concludes by saying yes, this villain Hitler was faced down by the world. Just don't take too much comfort in that. As Brecht promises in delphic fashion at the very end, "The bitch that bore him is in heat again."

In a final modest misstep, the audio mix crescendoes with cries of "Sieg Heil! Sieg Heil!" and then segues to "Lock her up! Lock her up!" No need for that, people; Brecht was blunt enough. We got the message loud and clear.

Thanks for reading. Michael Giltz is the creator of BookFilter, a book lover’s best friend. It’s a website that lets you browse for books online the way you do in a physical bookstore, provides comprehensive info on new releases every week in every category and offers passionate personal recommendations every step of the way. He’s also the cohost of Showbiz Sandbox, a weekly pop culture podcast that reveals the industry take on entertainment news of the day with top journalists and opinion makers as guests. It’s available for free on iTunes. Visit Michael Giltz at his website. Download his podcast of celebrity interviews and his radio show, also called Popsurfing and also available for free on iTunes.
Posted by Michael Giltz at 11:19 PM