"A Hero Born" by Jin Yong -- my review exclusively at Book and Film Globe!


The thrilling movie Crouching Tiger, Hidden Dragon blew me away in the year 2000. Samurai films? All over it. But wuxia, the historical genre that combines martial arts with flights of fantasy? Not only had I never seen such a film (or book or TV show), I didn’t even know the genre existed.
I wanted more, right away. So I dove into the genre that Crouching Tiger celebrated. I also ran to the library so I could read the classic novels by Wang Dulu on which Ang Lee based the film.
No such luck. They weren’t available in English. And despite the movie’s record-breaking box office all over the world, they still aren’t. Come to think of it, I also couldn’t find decent translations of any stories about the Monkey King, a character as beloved and familiar in the East as Robin Hood is in the West.
The more I looked, the more titles I found trapped behind the Great Wall of No English Translation.
And the more titles I wrote down, the more one author’s name appeared again and again: Jin Yong. When Jin died last October at the age of 94, Western media outlets tossed out names like Harry Potter and Star Wars to capture how beloved and well known his stories are throughout Asia. 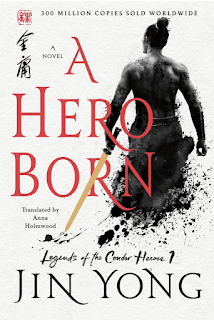 Jin wrote a string of classic adventures, serializing them in newspapers like Charles Dickens and then collecting them in books. He’s sold 300 million copies worldwide. People have adapted his stories again and again into movies and TV shows and comics. In short, he’s the Chinese J.R.R. Tolkien.
Well, not quite. Yes, Jin’s novels have a modest dose of fantasy. But they’re rooted in this world, so a much better comparison is Alexandre Dumas, who knew a thing or two about thrilling adventures. So think of A Hero Born as a Chinese Three Musketeers more than a Chinese Lord Of The Rings.
Check out my full review, exclusively at Book and Film Globe!
Posted by Michael Giltz at 11:38 AM