THEATER: COLE PORTER REVUE "DECLINE AND FALL" IS THE TOP

Seven years ago, the York Theatre Company delivered a sterling revival of the Maltby & Shire revue Closer Than Ever. It ran and ran. Now they're presenting the legendary but little seen 1965 revue called The Decline and Fall Of The Entire World As Seen Through The Eyes Of Cole Porter. It could run and run.

Closer Than Ever was a fully mounted, fully rehearsed production. Decline and Fall is the middle show in a three-part season of York's Musicals In Mufti series. For York, Muftis are their term for staged concert performances. A game cast is handed a script and just a few days to learn the songs, practice choreography, rehearse their lines and then stand up in front of a paying audience and deliver.

The first show in the Mufti season devoted to Porter was Fifty Million Frenchmen and that's exactly the sort of show an Encores-style series should be tackling. Not musicals with one eye on a big budget Broadway revival, but shows that rarely if ever are done anymore and probably won't get a Broadway revival no matter how well received. Up third is an Ethel Merman vehicle called Panama Hattie.

And smack dab in the middle is the show I'm certain will be the best of the bunch. Decline and Fall was mounted in 1965 and apparently hasn't been seen in New York City since, despite running some 15 months and being one of the biggest hits of its kind in history. Masterminded by Ben Bagley, Decline and Fall is the very model of a modern musical revue. 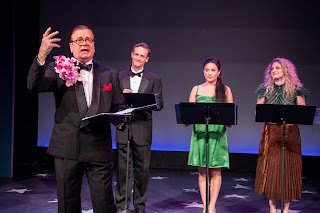 
By focusing on the lesser known songs of a major talent like Cole Porter, Bagley underlined what a tremendous songbook Porter had to offer. A four member cast is given plenty to do, Bagley's between-song patter is swift and informed, the tunes vary from solos to duets to trios and so on, from sad (rarely) to happy (often) to witty (always) and the evening breezes by.

That's precisely what this revival accomplishes too. The master of ceremonies is Tony nominee Lee Roy Reams, surely the only actor to play both Cornelius and Dolly Levi in legit productions of Hello, Dolly! Reams offers the right touch of avuncular charm and dry wit to the proceedings. You almost don't notice how well the show eases its éminence grise into the proceedings -- it's halfway through act one before Reams solos on an amusing "I'm A Gigolo." Then he's a constant presence, whether offering up a Sophie Tucker imitation, duetting wonderfully on "Well, Did You Evah?" with Danny Gardner, nailing an obscure song cut from Anything Goes and then ending the night on a wistful, hopeful note with "Experiment."

Gardner has a lot of fun on that warhorse "Well, Did You Evah?" But he's the show's core throughout, whether playing a tap dancing fool in a few welcome bits, using his square-jawed charm to goofy effect in the opener "I've A Shooting Box In Scotland" or getting serious with "At Long Last Love." Gardner enjoys an easy rapport with...well everyone, from the two female co-stars Diane Phelan and Lauren Molina to Reams and the audience. His reactions to the hijinks around him accentuate the pleasures of the night without ever calling attention to themselves. A stand-out in the Dames At Sea Broadway revival, Gardner is right at home in the musicals of the 1930s, proving he was born about 70 years too late. 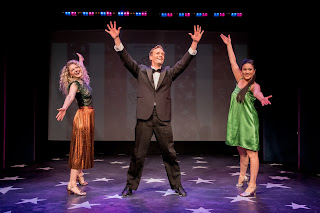 
Molina was a hoot in the York's very successful musical Desperate Measures and is at her best on the comic numbers here, especially "Make It An Old-Fashioned Please." Phelan has fun too, including her winning duet with Gardner on "But In The Morning, No." Yet she also delivers on the quieter numbers like "After You, Who?" and too many duets and trios and full company numbers to mention. Indeed, the list of songs in the show program is 30 titles long, not counting the medley at the end. Onstage pianist, occasional chimer-in on songs and music director Eric Svejcar works overtime.

Half the fun of a casual staged concert performance like this is the complicity between the performers and the audience. When a little something goes wrong, Reams quickly smoothed things over with an amused comment, turning the tiniest of off moments (like Phelan grabbing a stool Reams needed) into a happy accident. Director Pamela Hunt has a gentle touch on the proceedings, lending this evening the casual but assured atmosphere it needs.

But eleven performances? This show can and should run longer. If it does, the projections by Jamie Goodwin should be given a punching-up. And certainly the complicated medley at the end will improve mightily once the cast has more performances under its belt. Yet, the let's-put-on-a-show vibe is precisely right here.

The notes by Charles Wright give a wonderfully detailed look at the show and the career of Bagley, who delivered a string of revues and even more influential run of albums. When Wright says this 1965 revue prompted a reassessment of Porter, I'll assume he means a reassessment of what shows and what songs mattered. A number of the songs here are standards, but the suggestion is that Decline and Fall rescued them. Mind you, Porter was hardly forgotten by 1965. He had a string of hit Broadway musicals into the 1950s, ending with Silk Stockings. And the feature film High Society opened in 1956, the same year Ella Fitzgerald launched her legendary tribute albums with Ella Fitzgerald Sings The Cole Porter Song Book.

Porter's legacy was ensured. Still, even now a good chunk of the songs in Decline and Fall aren't well-known or often recorded but are a treat to hear. As Bagley knew and this Decline and Fall revival prove, string them together and present them with care and you can have a swell party indeed.

Posted by Michael Giltz at 1:47 PM