IOLANTHE ** out of ****
NYGASP AT KAYE PLAYHOUSE AT HUNTER COLLEGE


Sometimes a show isn't very good. Sometimes the performances are mostly...enthusiastic. Yet in the right context and with the right crowd, a fine time can be had.

First up: Panama Hattie, a (much) lesser Cole Porter vehicle for Ethel Merman from 1940. It's the final production of the York Theatre's season devoted to "mufti" performances of three Porter shows. That is, staged readings presented casually in street clothes so you can get a sense of what rarely seen shows are actually like.

It's been a good season. The musical Fifty Million Frenchmen has a superior score and clutch of songs they did right by. With a tightened (or new) book, you could put it on commercially. The revue Decline and Fall... is a signal work from the 1960s well worth revisiting. It could and perhaps should have extended -- no changes needed.

And now this military-loving, flag-waving bit of nonsense. It's not good and thus it's precisely the sort of show that should be presented in this way. The movie bears little resemblance to the play and ditched most of the songs. The original score has never been recorded. The stage version will never be revived commercially, so you won't see it any other way

So the York deserves plaudits for putting on this evening, giving people a chance to see the entire book (filled with romance, terrorism, American sailors, British butlers and so on), hear the modest score and get a sense of how rote Broadway could be two years before Oklahoma! upended everything but good.

With about five minutes of rehearsal time and script firmly in hand, the game cast offered it up. Under those circumstances, it's only kind to single out the pluses. As a kid who intimidates the Ethel Merman character, Kylie Kuioka was a teensy bit cute. But what a pro! She knew her every line and probably knew everyone else's as well. Kuikoa might have left her script backstage for all she needed it. In ten years, she'll be directing. As the butler-besotted Florrie, Anita Welch had personality to spare and a strong voice. 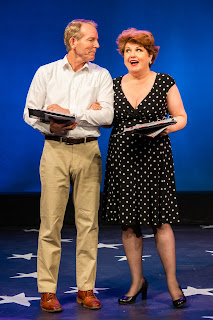 But it's an Ethel Merman vehicle and all that mattered was the lead. Klea Blackhurst (who knows from Merman) was more than up to the task. Without her on stage, staging Panama Hattie would felt more like exhuming it. But Blackhurst lifted the evening up. She belted out songs, she charmed everyone and when something went awry (like losing her place in a song or losing her bracelet when it flew into the audience), Blackhurst made the most of it. (My favorite line: when speaking about a villainous woman trying to scuttle her romance, Hattie says, "I'd like to see her surrounded by six silver handles.") Just like Merman all those years ago, Blackhurst took some hoary material and convinced us it was a treat to perform. The audience ate it up.

Then there's NYGASP, more properly known as the New York Gilbert & Sullivan Players. For 45 years, they've kept the flame alive for the comic operettas of G&S. Sure, you and I might be able to name the Big Three (The Pirates Of Penzance, H.M.S. Pinafore, The Mikado), but NYGASP and their enthusiastic audience can name them all, plus their plots and the best numbers. Just try them.

I always pictured this troupe as a cross between amateur theatricals and a Met opera production of a war horse -- one of those very traditional and very familiar stagings the Met trots out with newer talent to get some ka-ching at the box office. And what do you know? That's precisely how it seemed to me. The staging is so faithful and traditional you'll think you've slipped back in time.

The large ensemble is filled with very enthusiastic performers and a few ringers in the lead roles. The set is spot-on and could have been lifted from Topsy-Turvy. The one shining exception is the large and very impressive orchestra, which is conducted by Albert Bergeret, the company's founder, artistic director and general manager. The musicianship would do Broadway proud. That aside, if you were stationed in India when the British Empire was in full force and the locals staged G&S, the vibe of this Iolanthe is exactly what you'd expect to see.

You get the strong feeling the audience is revisiting old friends, by which I mean G&S, Iolanthe and the actors on stage, all of whom are undoubtedly familiar to them over the years. That camaraderie and sense of people picking out their favorites extends to the main role of the Lord Chancellor, played by crowd favorite James Mills. He's played every role possible and when not on stage he's stage managing, handling tech and so on. Mills delivered up "Love, unrequited, robs me of my rest" with aplomb...all four times. Just to prove my ignorance, I only knew the song from Mandy Patinkin's solo debut, with not a clue where it came from.

Lifting up proceedings appreciably was Angela Christine Smith as the Fairy Queen and David Macaluso as the romantic lead Strephon. They excelled in both singing and acting, a rarity. But no cavils. Is it any surprise the Executive Director David Wannen both intro'd the show and popped into a small role as the strapping Private Willis? Not at all! (Even less so when you note he has some of the best credits beyond G&S.) Are veterans of NYGASP certain to shed a tear over Laurelyn Watson Chase, giving her final performance as the company's leading soprano? Of course they will.

Mounted for two nights only, Iolanthe and everything presented by NYGASP is a pure labor of love. That's true of anyone working in theater, but doubly so for G&S-ers. While London can boast of multiple companies devoted to their repertoire and at least the possibility of the occasional commercial production, here NYGASP is the only game in town. If, like me, you yearn to actually see these shows rather than just read about them, you'll come with a generous spirit. It's all stuff and nonsense.  And sometimes that's exactly what you need.


Thanks for reading. Michael Giltz is the creator of BookFilter, a book lover’s best friend. It’s a website that lets you browse for books online the way you do in a physical bookstore, provides comprehensive info on new releases every week in every category and offers passionate personal recommendations every step of the way. He’s also the cohost of Showbiz Sandbox, a weekly pop culture podcast that reveals the industry take on entertainment news of the day with top journalists and opinion makers as guests. It’s available for free on iTunes. Visit Michael Giltz at his website. Download his podcast of celebrity interviews and his radio show, also called Popsurfing and also available for free on iTunes.
Posted by Michael Giltz at 11:58 PM