THEATER: "Forbidden Broadway" Is Back and Broadway Trembles (With Giggles)

FORBIDDEN BROADWAY: THE NEXT GENERATION *** out of ****
THE TRIAD

Don't take it for granted. The silly, sly new edition of Forbidden Broadway is comfortably ensconced at The Triad on the Upper West Side. Let's hope it runs and runs so long the show has to toss in new numbers (Mrs Doubtfire, anyone?), bring in new performers and then we can all take it for granted again. Right now, creator Gerard Alessandrini's franchise is as fresh as ever. Sure, you know what to expect and thank god for that. 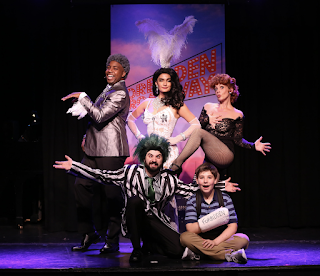 Here's where I run down the list of songs and tell you which spoofs are spot on, which performers do the best at capturing the vocal quirks of such and such a star and maybe which ones are a little wide of the mark. Hey, you can't reinvent the wheel when covering a revue like this.

And Alessandrini doesn't reinvent the wheel when it comes to delivering the goods. After all, it's not the idea of Forbidden Broadway that's so clever. It's the execution. Needless to say, the wigs of Conor Donnelly and the costume of Dustin Cross work overtime (and must be awfully sturdy since they get thrown on and ripped off at a furious pace). The choreography of Gerry McIntyre delivers on a small stage while skewering the big moves of Broadway. Musical director and pianist Fred Barton seamlessly papers over any tiny pauses in action or momentary blips during scene changes. And above all Alessandrini's book and lyrics are up to his usual high standards.

Everyone in the cast has a winning moment, though Joshua Turchin as the juvenile is a modest weak link. It doesn't really matter, not in the context of its "let's put on a show" vibe. Immanuel Houston is especially fun as André De Shields. Chris Collins-Pisano tackles everyone from Beetlejuice to Harold Prince with amusing energy. And Aline Mayagoitia delivers a delicious Bernadette Peters.

But first among equals is Jenny Lee Stuart, with her terrific voice and equally terrific comic timing. She's hilarious as Gwen Verdon in a Fosse/Verdon bit (jumping in to say her name right on top of Collins-Pisnao saying 'Fosse"). She elevates the easy mocking of Renee Zellwegger in the bio-musical Judy by creating a fully realized Garland. Indeed, the lyric "Zellwegger smells in my part" is not Alessandrini's finest internal rhyme. But who cares when Stuart is killing it in every way? And her Mary Poppins was equally splendid and served a much better spoof.

I'd already blocked the godawful movie Mary Poppins Returns from my mind. But I especially disliked the bathos of "The Place Where Lost Things Go," a cloying ballad that seemed to suggest to children that their mother wasn't really dead, just misplaced, perhaps lost in the seat cushions of the couch or buried under a pile of stuff in the attic. Ok, that's not precisely what it tries to say, but it's perfect for satirizing. Alessandrini turns it into a ballad called "The Place Where The Lost Shows Go," an ode to the flops and forgotten musicals of yesteryear. The costumes and wigs capture the practically perfect nanny to a t, the flood of posters from old flops will warm the heart of any theater lover and the number is easily appreciated by casual fans. Plus, Stuart's performance is indeed practically perfect and dry as a martini. Hey, if my praising Stuart causes some backstage tension, they can always write a song about it! 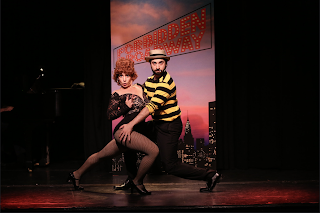 Indeed, Forbidden Broadway always balances between insider dope and tourist-friendly fare. Sometimes it's easy to do. Even casual fans will guess King Kong The Musical was both really expensive and lost a lot of money for its investors, so any jokes about it can kill.

My modest caveats are the spoofs that only work if you've seen the show. It's funny to mock Oklahoma! with "Woke-lahoma!" Actually, the song title alone is a winner. Still, I thought the numerous digs in this number work far better if you've actually seen the current production. (My guest disagreed and since he hasn't seen the current revival but laughed at the spoof, what do I know?) Similarly, I suppose the grim nature of Irish drama is always a rich target and "How Are Things In Irish Drama" is kind of funny. But since The Ferryman closed more than a year ago this number already feels outdated though Forbidden Broadway: The Next Generation just opened!

Finally, I think the Harry Potter bit is off target. Alessandrini's spoofs are funny because they come from a great love for musicals and a gossipy awareness of what's happening on stage and behind the scenes. Not here, where he mocks the super-high prices of the two-part play Harry Potter and the Cursed Child. But that take on the show is about seven months out of date. Ever since the original cast left, the box office for Harry Potter has dropped in half, from more than $2 million a week to more often $1 million. (It's still sold out and still worth seeing.) Discount ticket offers have been coming fast and furious, as any theater-goer should be aware. So you can find a lot of bargains -- relatively speaking -- to this show.  If you were going to mock anything, it should have been that. And if you want to talk high ticket prices, Moulin Rouge! has been charging (and getting) eye-watering premium prices from its first preview, while Hadestown brazenly doubled its prices the day after winning the Tony for Best Musical. I expect Forbidden Broadway to be on the cutting edge of the inside dope and this is one time the show misses the mark.

Not that it matters! Two or three numbers that spoof stuff you haven't seen is probably par for the course for most people attending. Most of the time, you're a big enough fan to get the joke anyway or you can just enjoy the performances and songs in their own right. That's surely the case for this edition. In the Star Trek universe, the TV series Star Trek: The Next Generation is arguably the best of all the shows in the franchise. I haven't seen enough of Forbidden Broadway during its illustrious history to make that claim. But Forbidden Broadway: The Next Generation sure is fun.

Thanks for reading. Michael Giltz is the creator of BookFilter, a book lover’s best friend. It’s a website that lets you browse for books online the way you do in a physical bookstore, provides comprehensive info on new releases every week in every category and offers passionate personal recommendations every step of the way. He’s also the cohost of Showbiz Sandbox, a weekly pop culture podcast that reveals the industry take on entertainment news of the day with top journalists and opinion makers as guests. It’s available for free on iTunes. Visit Michael Giltz at his website. Download his podcast of celebrity interviews and his radio show, also called Popsurfing and also available for free on iTunes.
Posted by Michael Giltz at 10:00 PM