THE GLASS MENAGERIE ** out of ****
WILD PROJECT

Sometimes, thankfully, you just do the play. Classics can bring out the devil in artists. What meta conceit can they slap onto a familiar drama to "bring it to life"? Change the time period? Perform it Kabuki style? Cast all men? All women? They become so desperate to leave their stamp on a classic that they forget it's a classic for a very good reason. The play is worth doing, as is.

This new production of The Glass Menagerie co-directed by the estimable Austin Pendleton & Peter Block implied some high-concept makeover this war horse doesn't need. Press releases threatened it would be Wes Craven meets Tennessee Williams, with a score inspired by The Exorcist. Boo! Well, the trick was on us. No, the set is not filled with props made out of glass, just the usual display of glass animals on a side table. The score by Sean Haggerty is moody but not intrusive, as indeed are all the other tech elements. Sure, the sad and ghostly Laura (who already haunts the house when not roaming the streets) can often be seen holding a lonely vigil behind a scrim when she's not onstage.

And that's about it. This is your mother's Glass Menagerie and thank goodness for it. It's modest pleasures are a straightforward presentation of the text. It's not tilted towards one character over the others. The directors don't strive you to think about what they're doing instead of what Williams was doing. They honor the text. This production may not catch fire, but at least it has the decency to hold the play up to the light and let it illuminate what they do, rather than the other way around. 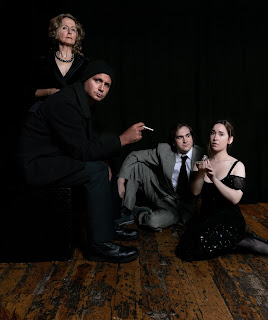 Surely you know the story. The Wingfield family is a sad group, living on dreams of yesterday or tomorrow because today is too depressing to bear. The father took off years ago, leaving behind a wife and two children, his only contact being a postcard from far away stating "Hello Goodbye." His photograph looms over the stage and their lives.

The mother Amanda (Ginger Grace) tells and retells about her glory days as a desirable catch, the bygone era when gentlemen callers would floor her porch. The daughter Laura (Alexandra Rose) pretends to go to typing school but spends most of her time wandering the parks of St. Louis. Mostly, she hides at home, dreamily fussing over her glass menagerie, obsessing over a physical defect (a slight limp) and on rare good days remembering the boy in high school she fancied. The son Tom (Matt de Rogatis) struggles with the strait jacket of his life. He is trapped in a miserable job at a shoe warehouse, can't find a moment's peace to do the creative writing he longs for and wonders how he became the sole support for two women. He's not the one who chose to get married and have kids so why is his life over before it began?

With one eye on heading out to sea as a sailor, Tom invites over an amiable coworker named Jim (Spencer Scott) as a potential love interest for Laura. Jim turns out to be the very high school boy she had a crush on, raising and then crashing all the hopes of the Wingfields one last time.

The best aspect of this show is the balance. Sometimes, the character Amanda dominates this drama. Other times it's the dreamy Tom as a stand-in for Tennessee. And once in a while, Laura steals the show, especially when her time with the Gentleman Caller Jim raises our hopes even when we know better.

Not here. Everyone is admirably in their place. Amanda nags Tom, but isn't an overbearing harpy, thus allowing us to forgive him for running away at the end. She can also be played as semi-delusional, like Blanche at the end of A Streetcar Named Desire. Grace keeps Amanda relatively grounded and real. Though Tom is often played as gay (he's a stand-in for Tennessee, after all), de Rogatis presents an angry young (straight) man restless with a yearning for freedom. He shines especially during the monologues addressed to the audience.

Often the Gentleman Caller is played by a drop-dead gorgeous actor, the better for us to suspend our disbelief. But Scott convincingly looks the part of a high school star who has gotten soft in the years since those glory days. His athleticism is far behind him and Jim yearns for those who can still remember the big man on campus he once was. Spencer makes his moments with Laura make sense. A dreamboat who kisses her can seem hard to believe or even cruel. (Amanda is quite fragile and strange after all.) But this Jim is swept up by finding someone who remembers him the way he was and not the way he is. Her attention to him is just as intoxicating as his attention to her.

The weak link unfortunately is Rose, making her professional debut. In a production titled towards the mother or son, her lack of readiness for such a major role wouldn't matter as much. But the balance they strive for simply can't work when one of the four legs of this sturdy table isn't ready to bear its weight. So it's uneven and ultimately unsatisfying. Yet a Glass Menagerie that doesn't attempt to outdo Tennessee will always be welcome.


Thanks for reading. Michael Giltz is the creator of BookFilter, a book lover’s best friend. It’s a website that lets you browse for books online the way you do in a physical bookstore, provides comprehensive info on new releases every week in every category and offers passionate personal recommendations every step of the way. He’s also the cohost of Showbiz Sandbox, a weekly pop culture podcast that reveals the industry take on entertainment news of the day with top journalists and opinion makers as guests. It’s available for free on iTunes. Visit Michael Giltz at his website. Download his podcast of celebrity interviews and his radio show, also called Popsurfing and also available for free on iTunes.