THEATER: "Enchanted April" -- The Charming Tale That Cannot Fail (Much)

It's 1922 and four women -- four strangers, really -- impulsively find themselves renting the castle San Salvatore on the coast of the Mediterranean for the month of April. It's absurd. A castle? For the entire month of April? Sunshine? And wisteria?

They all have their reasons. Lotty is a timid soul but when she spots an ad offering a castle for rent she somehow gins up the nerve to approach another woman in her club. They've never spoken despite attending the same church on Sundays. Lotty plants the idea and her friend Rose Arbuthnot tries to resist but then suggests maybe simply writing for the particulars wouldn't be so wrong. Before you know it, they're advertising for roomies to share the expense and up pop the dour Mrs. Fisher and the glamorous Lady Caroline Dester. They all decamp to Italy and the romantic setting conjures up the usual magic. The women blossom, become friends, romances are begun or rekindled with loved ones and it truly is enchanted.

That's the essential plot of The Enchanted April by Elizabeth von Arnim. It was published in 1922, between the wars and is the sort of light comic novel the British do better than anyone else. Heck, as far as I can tell, no one else even tries to write these sorts of books. It's sweet, perceptive, very funny in the kindest and most charming sort of way and well why not say it...enchanting. One hundred years have come and gone and I can recommend it unreservedly.

It's been turned into a play several times, a radio play, a few musicals and two feature films. The most recent movie is perhaps the most popular adaptation of all. That 1991 film was nominated for an Oscar and tweaked the story ever so slightly, as most adaptations can and must. Joan Plowright was especially good as the starchy Mrs. Fisher and really you can't beat the Mediterranean for sumptuous settings. 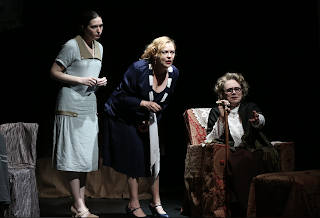 Here it comes again. You really can't go wrong with this story and the romantic idea of an Italian vacation to stir the soul. (E.M. Forster pulled the same trick with A Room With A View.) I'm not sure why but they've changed the title to An Enchanted April, which seems more random and annoying than the 1991 film insisting on just Enchanted April. Otherwise, the book changes by Elizabeth Hansen are reasonable choices.

In the original novel, Rose Arbuthnot is unforgivably religious and finds her husband's career as a popular writer churning out biographies of royal mistresses distasteful and embarrassing. It also mentions they lost a child. Here Hansen downplays the Puritanism and gives Rose a sad monologue about her guilt over the little boy's death. In the novel, the impossibly beautiful Lady Dester is just bored of being chased by every man alive. Try as she might to be dismissive or rude, everyone is charmed by her every utterance. Here, she is haughty, which is fine. She's also haunted by the recent horrors of the war, where Lady Caroline worked as a nurse and saw her share of suffering. In many ways, she is suffering from PTSD. Those changes lead to some other modest plot changes but it's all fine and good. Four women come to Italy, clash a little, loosen up and take a plunge into newer and better lives.

The big problem is the score. C. Michael Perry did the music and he and Hansen tackle the lyrics. It's all recitative tunes, with aimless, meandering melodic lines, the sort of thing people think of as a la Stephen Sondheim though of course Sondheim always offers great melodies. You rarely get anything approaching a proper song, just vocalizing about the lovely view or this and that from a modestly voiced cast. It wouldn't matter that most of the performers are not belters if they had some charming tunes to deliver. But alas, the flowers bloom but the songs do not. This being a musical, that is a fatal flaw.

The story rescues things, as it always does, along with two standouts. Leah Hocking captures the genial charm of Lotty, who puts the plot into motion and constantly insists something will happen because she can see it. This could be ditzy or silly or jokey but Hocking makes Lotty irresistible. Alma Cuervo is costumed to echo Plowright to a t. Happily, her performance is not a carbon copy but Cuervo's own thing. Though why they felt the need to have her slam her cane to the ground and shout "Brilliant" at the very end is beyond me. It was hardly a catch phrase of hers and simply underlined the lack of oomph from the finale.

With a very modest budget, the women were costumed nicely by Matthew Solomon, though I doubt Lady Caroline would have worn a flapper costume to any dinner at the castle and Jim Stanek's suit could have been a little more period appropriate. A little dab of Brylcreem (or rather its precursor since that came out in 1928) would have helped him too. The idea of white umbrellas serving as a backdrop was fine and the sets by William Armstrong did the job despite very few resources. The music was provided by two players though here again the musical choices were unhelpful. Better just two pianos instead of having one chintzily try to echo the sound of strings.

Still, for a brief moment it all works. Mrs. Fisher sings "This Feeling," a song about a tingle of excitement and pleasure she hasn't experienced since her youth.  Better than any other tune, it reveals character and pushes the plot forward. Cuervo makes the most of it, the song approaches a melody and for a moment you forget the modest backdrop, the performer and just get caught up in the moment. This feeling doesn't happen very often, but it's a treat when it comes.

Thanks for reading. Michael Giltz is the creator of BookFilter, a book lover’s best friend. It’s a website that lets you browse for books online the way you do in a physical bookstore, provides comprehensive info on new releases every week in every category and offers passionate personal recommendations every step of the way. He’s also the cohost of Showbiz Sandbox, a weekly pop culture podcast that reveals the industry take on entertainment news of the day with top journalists and opinion makers as guests. It’s available for free on iTunes. Visit Michael Giltz at his website. Download his podcast of celebrity interviews and his radio show, also called Popsurfing and also available for free on iTunes.
Posted by Michael Giltz at 12:59 AM