THEATER: "Richard III," A Schemer Undone By Greed, Violence And A Poor Production

Richard III is undone by distrust. This cruel manipulator is never trustworthy so he can't imagine anyone else being trustworthy either. Ultimately it makes him paranoid and incapable of holding onto the power he has so ruthlessly seized.

But DruidShakespeare: Richard III is undone by too much trust. All ideas are welcome no matter how unconnected to one another they might be. The mishmash of sets and costumes and periods and acting styles turns what was a dully traditional production at the start into a confusing bore by the end.

Happily, they found a solid Richard in Aaron Monaghan. He scuttles about the stage a la Antony Sher and proves charmingly evil. Has Shakespeare ever written a more appealing villain? If his vocal tics seem increasingly desperate by the end, we can pretend it's the character spiraling down rather than an actor trying to hold together a production spinning out of control. 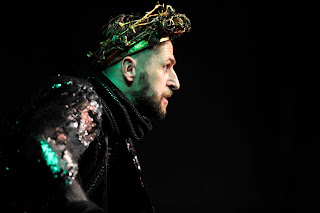 
Playing off a reference to a slaughterhouse, the entire stage is framed in harsh metal by set designer Francis O'Connor, with all the trappings of a modern slaughterhouse, including the dirt-covered floor and a cattle gun (the weapon employed by Javier Bardem in No Country For Old Men). Tall metal doors line the sides and the back. All that's missing is a maze to lead the royal cattle to slaughter so they won't realize what's happening until the last moment.

Richard pops out of a grave site and launches into his opening gambit of winning over the audience to his wicked, wicked ways. "Now is the winter of our discontent...."  The bodies do pile up, with Richard wooing and wiling away towards and past and around his victims. He keeps his eye on the throne of England, symbolized by the crown resting on a skull displayed in a box hovering above the stage. It's almost within his reach.

The show sort of works, for a while. Richard's wooing of Lady Anne (Siobhán Cullen) has a power that can't be matched when a similar scene is reenacted again and again throughout the play. Richard's rapport with Buckingham (Rory Nolan) sort of convinces. And the anachronistic cattle gun wielded is ok, though Marty Rea's monotone executioner soon pales.

Many of the supporting performances simply fall flat, their lines delivered without purpose or meaning. But the story moves along on its own momentum just enough to get us to act two. 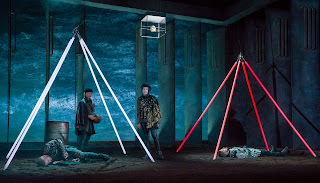 Nothing is dramatically different in act two except all the poor choices you ignored in act one become inescapable. While Druid mainstay and co-founder Maria Mullen has fun miming the confusion and easily played emotions of the Lord Mayor, the uninteresting secondary performances pile up as much as the bodies. Even something as minor as the actress playing one of the Princes in the Tower doubling as a page annoys when the costumes by O'Connor (and Doreen  McKenna as co-costume designer) do so very little to set the two roles apart. And the clothes become increasingly odd, such as the sort of metallic bronze and silver royal cape Richard III dons after being crowned king. It's echoed by the red metallic cape uneasily sported by Richmond in the final battle, a piece of clothing that clashes unpleasantly with his odd regalia and almost gets tangled up in the climactic sword fight.

Worse is the cartoonish, massive hood sported by an executioner called in to dispatch the beloved tykes in the Tower. Presumably used to allow one actor to more easily double up on roles, it looks like something out of a Looney Tunes cartoon. (The actor's cartoonish gravel pit of a voice doesn't help.) Worse than that are the somewhat similar cheap black hoodies sported by servants and the like who rush in with a stream of bad news for Richard. The action starts to look like a Monty Python sketch. A rain machine drips throughout the show here and there as you keep wondering what exactly is falling from the ceiling until the rain scene happens and you think, ah, that's what that was! Worse, it drips pretty consistently throughout the scene after it's supposed to stop.

The night before the battle, Richard's army sets up tents for the king, tents which are made of long neon polls lit in red. Why, one can't imagine. Then they turn to pale blue, indicating, it seems, that night has come. Richard gets into his tent but then the other tent turns red again and in pops Richmond for his nap. When the battle is about to commence, they are clumsily lifted up into the rafters, the poles bouncing off one another and seemingly alive like the legs of neon spiders. It's a distracting and bizarre choice from start to finish.

Scene after scene passes woodenly, such as the meeting/confrontation of the royal women. Queen Margaret scores the most points, as always, thanks to her venomous curses, but not enough to wake the moment up. The lighting by James F. Ingalls rarely sets one moment off from the next. The music by Conor Linehan crashes in obtrusively once or twice to announce the beginning of an act or that something exceptionally dramatic might be going on. A vague mist appears every once in a while, uncertain as to whether it's wanted or not before timidly slipping away again. And the battle choreographed by David Bolger is simply inept.

As a final dashed-off thought hoping to tie it all together, Richmond (Frank Blake) is crowned king only to echo the misshapen and scuttling spider silhouette of Richard. Does power corrupt? Perhaps, but it's certainly not been the through line of a show devoted to a traditional take on Richard as an inherently cruel man, not one bent by the weight of the crown.

Director Garry Hynes co-founded the venerable Druid in 1975 and has undoubtedly delivered the goods before, though we've had precious few chances to witness it in New York. Still, her work here is slapdash and poorly thought out. Unlike England, a play needs a ruthless leader.

Thanks for reading. Michael Giltz is the creator of BookFilter, a book lover’s best friend. It’s a website that lets you browse for books online the way you do in a physical bookstore, provides comprehensive info on new releases every week in every category and offers passionate personal recommendations every step of the way. He’s also the cohost of Showbiz Sandbox, a weekly pop culture podcast that reveals the industry take on entertainment news of the day with top journalists and opinion makers as guests. It’s available for free on iTunes. Visit Michael Giltz at his website. Download his podcast of celebrity interviews and his radio show, also called Popsurfing and also available for free on iTunes.
Posted by Michael Giltz at 2:10 AM